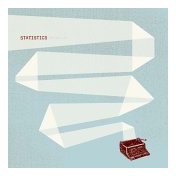 "So instead of wish fufillment, we get an acknowledgment of our wish."
-J. Niimi, Murmur ( 33 1/3 book series)

Denver Dalley plays guitar for Conor 'Twinkling Peepers' Oberst's side project the Desaparecidos. Denver lives in Omaha, and is friends with all the angry weeping oversexed boys there who tuck themselves under the wing of sound-shaman A.J. Mogis for the Saddle Creek label. Mogis recorded this nine-song album as well, and DD sent it to Tim Owen, Jade Tree founder and extraordinary photographer, who knows a good thing when he sees one (click!).

Statistics is Denver's private party with some friends, and Mogis helped on guitar and keyboard, getting all up in it with The Sparkling Mope like he's known for. Like Oberst and Tim Kasher (the bad vibes of the Good Life), the Dalley probably snogged his first uncaring girlfriend midway through Kiss Me Kiss Me Kiss Me Kiss Me and is all grumpy-wumpy about Her Changing Her Mind and Seeing Him For What He Really Is. The title of this record says it all. Just the facts, ma'am — and I've always LOVED Jane Austin, so let me spend the night in your dorm room. I won't try anything. I promise.

The Desaparecidos means "the Disappeared" and that's probably how the fella feels playing for Conor, whose personality you probably sense in the parking lot of the party he's decided to crash. Often Lie sounds like the frustrated, but musically eloquent Run, Lola, Run supernatural scream of someone who has to wait his turn, doesn't feel he connects, and wants to leave his recording gear behind and jog briskly to true love, even if it's kind of dumb and always in trouble.

The eloquence is in the morning-after vocal melodies, the foam of note perfect just-right six string sea shimmer, the never-overwhelming tapestry keys, the dramatic drums of Doug Van Sloun and Matt Baum. Trust me: This could be HUGE. It sounds like something the kids would gobble up with a spoon. "Final Broadcast," "Say You Will," and "Begging To Be Heard" all sound like HITS! But the lyrics never quite break out of their shell, and at least a couple lines could have used an editor ("Your eyelashes wish their way to the floor").

Robert Smith is a proper inspiration, kids. But listen to "Catch," which slowed down and got goofy and playful with the descriptions, or the wonderful romantic imagery in "Just Like Heaven," with its transcendent storyline that YOU KNOW is going to end miserably, but we have The Moment (the power of now) FIRST.

Statistics is failure calculated, let's sing to failure. I could ask: Let me smell a little of the stinky cheap perfume from the night before, Denver, like Bob would have. Don't just show me the bruises on your knees, show me how you got them. But I know it's not your aesthetic, and you and Mr. Owen will do fine with this. I just feel you'll have much more to say when you capture that moment in its frame, and not just talk about the passion.