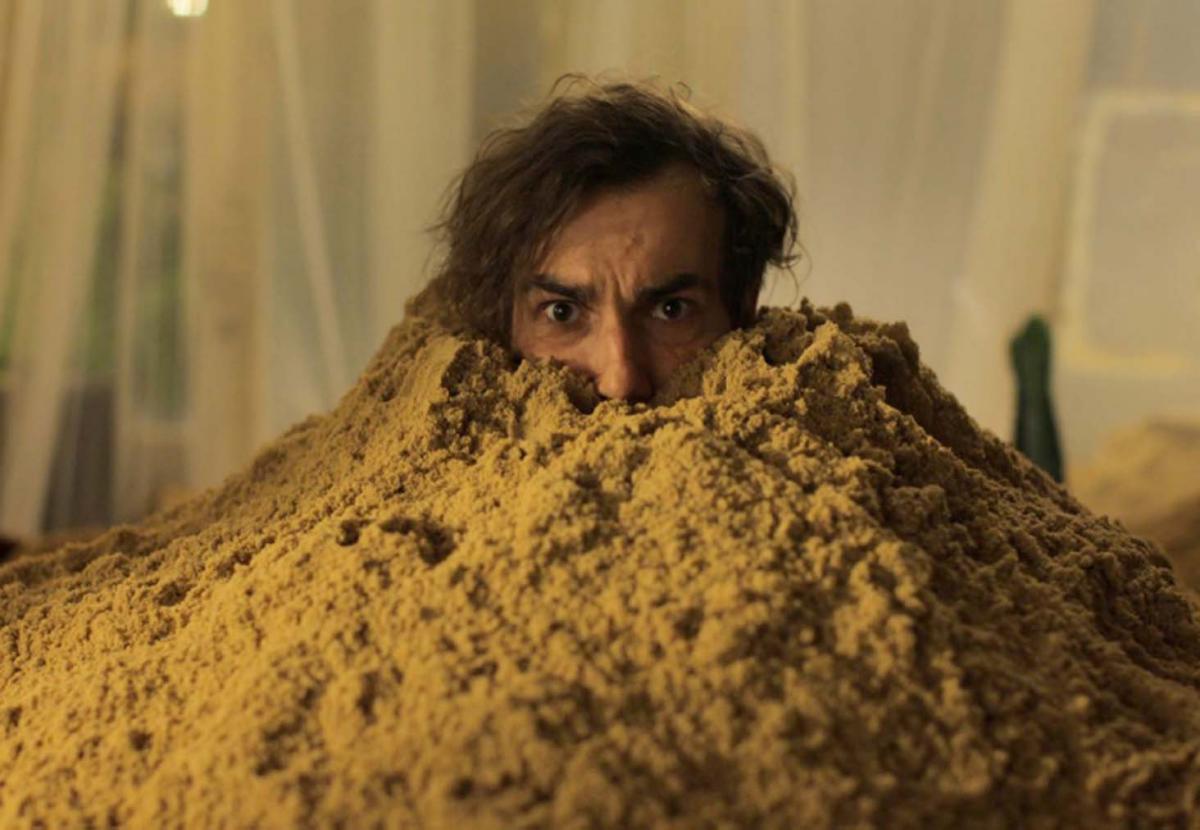 Bright, beautiful, romantic, and incredibly bizarre The Sandman is a must see film. It would easily be one of my top films of SIFF 2011, except for the fact that it’s playing at STIFF instead. The only reason that’s really disappointing is it means a single screening at a somewhat inconvenient time for those on a 9-5 schedule. But it’s worth the extra effort, and if you miss it, be sure to put a note down somewhere to catchup on this German language gem out of Switzerland.

Benno is an ultra-uptight neat freak who works in a stamp shop. When he’s not ripping off the gullible he obsesses about his weight each morning, provides brutally critical feedback to friends about their life’s work and gives untold grief to a young woman who works in the coffee shop below his apartment.  All in all a real mensch – or perhaps not. Then out of nowhere he develops and unusual affliction. He begins to leak sand. And not just regular sand, but magical instantaneous sleep inducing sand. Which similarly to normal sand tastes horrible in pasta.

This explosion of essentially dirt doesn’t really fit in with his other lifestyle choices. Especially when it causes his hot girlfriend to think he’s bedding the coffee shop girl (it makes perfect sense in context). Even his earnest protest that it can’t be true that he’s hooking up with the presumably frumpier woman because “looks are important to me” fails to mollify her. Oh, almost forgot. In the meantime he’s also beginning to share a recurring dream with the waitress he professes to hate.  This is a strange film – in a very colorful visual way that reminds me of a Michel Gondry creation, though more fun for me than his recent work.

Benno tries to find answers to the stress of having such chaos arrive in the midst of his supremely ordered life. Even going so far as call a psychic hotline. Though the advice he receives is direct if not especially helpful “I’m a fortune teller not a knower.” As one would expect in a film where someone or questionable moral fiber develops a superpower there’s a period of exploitation that follows.  After that period of experimentation he gets down to the business at hand. Together with his female nemesis he works to find the connection between the sand, his dreams and his life. amusingly the premise that follows could have been stolen from a Jim Carrey film. It worked then and frankly it works even better now. This is a gem of a film that’s definitely deserves to be seen.  I won’t say more other than it’s a really odd premise for what’s a very conventionally satisfying love story.  Even if there’s no way Benno is getting the security deposit back from his flat.  Oh, and the soundtrack doesn’t suck either…

My biggest question about The Sandman is why STIFF has chosen to screen the film only a single time? Whatever, the main thing is to just makeup an excuse and ditch work early to check it out. And while you’re there feel free to offer some unsolicited advice to move STIFF a couple of weeks out so more people can go.  It’s films like The Sandman that make it so important to be able to attend both.