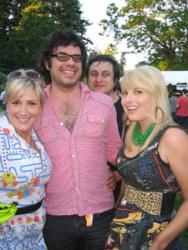 Sub Pop 20: Flight of the Conchords

When the humble and talented boys from Wellington, New Zealand took the stage on Saturday night at Marymoor Park, the excitement and anticipation of the crowd was palpable. 9:20pm had finally come, and Jemaine and Bret were cozying into their seats with acoustic guitars in hand, ready to "make love to our ears." And they did. For like forty minutes. But as Jemaine would probably say, "Well, forty minutes in heaven is better than thirty minutes in heaven." So I can't complain too much then, right?

Surprised yet pleased from the intense fervor of the Conchord-hungry crowd, Jemaine said, "We hardly even know you, but we already like you. You look like hundreds of heads, floating around because we can't see any of your bodies. Like stalks with heads on them." Bret went on to compare "the people of Washington state" to a bunch of gnome-headed pencils, "You remind me of those pencils with the bobbley heads on top. I'd come over and twist ya and hope that your hair would go all frizzy." Indeed this was the scene. The sold-out crowd had  now reached its peak after experiencing a full day of sunshine and brilliant Sub Pop rock.

The opening lines of "Robots" were hilarious, but it was "Jenny" that had the crowd on the tips of their Chuck Taylors. The song, not recorded on their E.P. or full length, requires a careful listen. It's about not remembering the details of a female encounter, let alone the girl it was with. The lyrics consist of Jemaine covering up his assumed actions as a retort to Bret playing the girl. "We watched a movie… Yeah, it was something like but not necessarily Shindler's List…" (pause… Bret correcting), "it was Weekend at Bernies II."  Pure comic perfection and a really sweet tune at that.

On the third song Bret busted out his 1983 Casio DG-20 electric guitar for island-beat "Boom King." They had quite a few more sound mixes and effects programmed this time. The crowd went nuts when the boys got up off their stools at the end of the song to shake their booties back and forth (unfortunately a flash-free press area = blurry bums). Screams were deafening, and I myself was still trying to grasp just what exactly it is that makes these two kiwis such an obsession to women from the states. I think their deadpan sense of humor, striking good looks, exotic accents and tight buns seal the deal to make the magic. I have to say though that it wasn't just flighty-fevered women in the crowd, there were just as many men in the audience as well (read "warm boxers" below).

Fast forward selector, at one point someone shouted out a request for the song "Bret you got it going on" and Jemaine, in his trademark monotone replied, "Well, then what about me?" The barking of requests was almost annoying at times, interrupting the genuinely genius banter. This is what set lists are for, and the good-natured performers that they are responded, "We know what we're doing."

The funniest thing that happened during their set was when a flying pair of boxers almost hit Jemaine on stage. "Although I don't want to, I'm going to show you what that is," as he got up to show the crowd the snowboard-themed undies. "They're warm," was his first reaction. Everyone screamed. "That's a first for us, thank you Seattle," said Bret. "Be aware that there is one man going commando amongst you. There's a commando in out midst."

Attempting to take credit for the stunt as if they had planned it, Bret commented, "That's actually our manager down there." But then the fans started yelling, "Murray!" to which Bret replied, "The T.V. show is not real." Jemaine replied with his distinct dumb-founded tone, "That's heartbreaking for me." It was a hysterical moment of banter indeed.

Of course a Chonchords set would not be complete without their biggest crowd pleaser, "Business Time." They had a little help from pseudo-bongo player, fellow Sup Pop comedian Todd Barry. His animalistic beats rounded out the silly and sexy song perfectly. I spoke with him briefly after their set and he said they didn't rehearse and he was worried it didn't sound good. It was tops. Even Jemaine seemed especially into it, rambling new lines like, "slip off those flip-flops," with his tone getting more and more seductive. So much so that he skipped over some parts and got a nod from Bret to get back to the chorus to wrap things up.

Their short and sweet set left the crowd at Marymoor wanting sooooo much more. But due to the strict and tight schedule of the festival, there was to be no encore (though they WERE the sell-out headliners). However, the fans kept screaming and did not budge a single inch. At one point there was a small glimpse of hope, the crowd shrieked with satisfaction, only for the house lights to be turned up full blast marking the "get the fuck out of here" point. A sad, sad moment for the flighties of Seattle.

I still don't think these two artists have quite grasped the fact that they are so popular here. You can tell they don't particularly dig all the fandamodium and groping seeing as how they can't go anywhere without being asked for an autograph or photo op. They just want to be normal dudes with the ability to go anywhere they wish without getting mauled. In the VIP areas at both the Sub Pop and Sasquatch festivals, the two sought-after men were still constantly attracting swarms. Bret was hiding out this time, only coming out for their brief set. However, when we had a chance to pose for a photo with Jemaine backstage earlier he did manage to get a pretty big grin on his face when my friend goosed his bum. That could also be the from fact that my friend and I were wearing dresses made out of retro Pacman and Star Wars sheets, (designed by Seattle's own J.Von Stratton). "Your dresses are hilarious. Are those really made out of used sheets? I don't think it's a good idea to be wearing a dress made from a fourteen-year-olds' sheets," Jemaine pointed out.