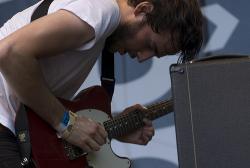 “The weekend has been great! I haven’t seen a single shitty band yet!” I told drummer of Foals Jack Bevon backstage nearby the Marymoor Mansion early Saturday afternoon. “Oh,” he said contemplatively with an apologetic laugh. “Wait until you see us tomorrow.” This kind of humorous self deprecation exponentially increased my infatuation with the collective fellows of Oxford, England band Foals.

“Every time we play in Seattle, stuff breaks,” the small and razor tongued frontman Yannis Philippakis wryly explained to the main stage audience after he tore a hole in the meshing of his amp with the head of his guitar and Bevan drove a hole through his snare early in the set. “That’s why we like it here,” he said with a coy smile. Wild coincidence! That’s also why I like it!

The highly danceable and insanely catchy tunes of Foals made me wonder why there weren’t more people around to witness their set. Sunday proved to be an even chiller day than the sold-out Saturday. If you’ve ever tried dancing and shooting a band like Foals simultaneously, you would understand why I’m amazed any of the photos I took during the first three songs came out. The fast drum beats, testy synth riffs, high-on-the-guitar-neck doodles, and always emotive vocals combine to make some pretty bad ass dance grooves. And by bad ass, I mean so bad ass that guitarist Jimmy Smith was spotted retching backstage. Alas, the occupational hazards of rocking as hard as they do.

"Cassius, Balloons, Heavy Water" (a “song about vampires”), and "Two Steps Twice" (My favorite Foals song) were among the sets strong family of songs.

Foals treads the line of math rock and dance punk so wonderfully, it occasionally and blissfully blows my mind. Philippakis’s brute delivery and cryptic lyrics further add to the magic of their live show. I thoroughly enjoyed their set and am heart broken that the Neumos secret show tomorrow night is 21+. Damn.