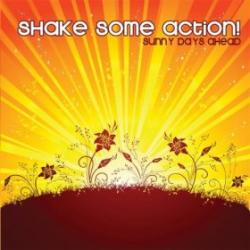 After dropping a demanding-to-be-heard debut, kicking up a racket at Bumbershoot 2007, and getting some major indie radio play, this is the second studio full-length from Shake Some Action! And the band requires that exclamation mark, I assure you.

The title of the album, though, could end with a question mark. Though I honestly believe that band leader James Hall is "kicking at the darkness to get to the light" (thanks, Bruce Cockburn), there is a dichotomy here between how things should be in life, in a relationship, and the beautiful messes and ugly truths they actually are.

My wife and I were riding on a bus to a cafe on a day off, and we'd just had an argument about something stupid (a life detail, not the Frank and Nancy collaboration), and I gave in to duty and put on my headphones to soak in some power-pop joy. When we got to where we were going I bought her a rather expensive little espresso bar dessert ($6.50) because I tried to make amends with something I knew she loved. I knew it would give some sweetness to the situation, but had no idea how moist, rich, and sumptuous that piece of cheesecake would be. I wanted to order three more instantly. That's what listening to this record a couple times through is like — my mood had brightened on the first play, with all the wonderful playing from James Hall (lead vocals, guitar), Chris Campbell (drums, vocals), David Bos (guitar, vocals), and Gary Miller (bass, vocals, and guitar). But by the fourth I was into it deep and sweet.

The thirteen tracks on this lucky number poke through, each one a rousing glow or a bit of heat stroke, all very natural and part of the daily environment of sudden joy and imminent vexation. This is a sugary jouissance, pure power-pop enjoyment, but with a strangely adult bite. The album title Sunny Days Ahead is an offhand remark Cheryl Waters made after the band's radio station in-studio, but I can't believe the KEXP DJ was merely referring to the weather outside. The album is not about ignorant bliss, but the artful skills of a poet, player, and performer willing to warn ("you're a big fake / look out for stormy weather," the tense and grinding album opener exhorts) as well as warm you up.

"I got my skin baked / the sun shining down on me / sew seeds of hate and one day you'll pay the penalty," the story continues, and you know this isn't any sort of happy face nostalgia trip. After "Get It Together" introduces the record with a firmly focused pile-driver of suitable tension, second track "Looking For Someone" has that best-of-post-punk-pop-and roll-droll-Brit-garage-rhythm-meets-sweeping-chorus so beloved by fans of more melodic XTC-Jam-Echo & the Bunnymen treasures. The guitars match the story of swarming life changes perfectly. Throughout, they combine their skills with Hall to layer delicious little riffs in everywhere, but it's not the kind of hard rock posing certain other "garage rock" Seattle bands do; these are organic echoes of Dave Davies and Mick Jones. Guys who could rock hard but never look like they're posing, just putting more pleasure into each song.

"Hurry Up" is in the 'B' section of British (or Brit-inspired) beat bands, from the Beatles to Badfinger and onward, but just beneath is a mad cackle from Robyn Hitchcock, in the mad grasp for momentary happiness. "Walking Away" is about the senses working overtime, with lines like "The room is so dark here, then I see you walking away," which would have fit perfectly on Matthew Sweet's Girlfriend album. It's a bitter fear of relational entropy mixed with sonic butterscotch hooks, crunchy peanut butter riffs, and smooth white chocolate vocals. It piles on the abundant and imminent loss as crippling as a ice cream sundae brain freeze.

Hall is one of those idiosyncratic pop rock voices; the paradox of a stylist who can create a private Wall of Sound, songs that sound huge for small stereos and will bless the faithful but tend to be too pure for the mainstream (he should at the very least have the success of Brendan Benson). But it's by using the authentic kick ass juice of a tight, can-do rock band that these sharp slices of stinging life don't lay on the plate as bedsit studio genre fiddling. Sunny Days Ahead seems so wholesome on the surface, until you run into the fear of abandonment and failure in a lyric like "you're so free / you don't need to talk to me." That sort of vibe might cut out the casual listener. Then again, when "Your Valentine" is played so perfectly, with its high chiming notes of guitar and melancholy in its smooth melody, you realize that Shake Some Action! are delivering what people have always wanted from artists like Tom Petty on the big scale and Shane Tutmarc on the smaller. "You Don't Care" is relentless in its examination of a self-destructive need for control, greedy desires met on every level, great tumbles of Bowie-style imagery about a hung-up, hungover existence. "All you need is what you love" meant here as a criticism, is the most wicked burn I've heard in a rock song since the glory days of the The's Matt Johnson.

The crunching blues-pop on the finale "Who Do You Love?" features guest licks from Young Sportsman's Ryan Maxwell, and gives the set a Baker's Dozen feel of thematic luxury most albums can't afford to create. I do wish there were one stupid feel-good track here somewhere (maybe a cover of "Something Stupid" itself?), even done ironically, just to lighten the load. And the only thing I fear about this record is that taken altogether it might be too much of a good thing; maybe this should have been three separately released EPs or a series of colored seven inch vinyl records. But then they all would have had to be rounded up again someway, right? And why not do it clean the first time?