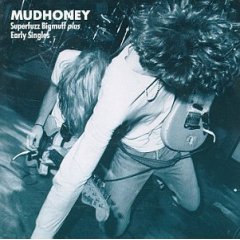 As Jay Hinman, Lost In The Grooves collector-genius and brilliant liner notes writer to this fabulous, extravagant reissue of one of the Pac NW best albums ever, says, "There was Mudhoney and there was everybody else." Mudhoney are the sturdy, weather-beaten bridge of the great, world-changing garage rock of the Sonics and the Wailers, through the grimy post-punk of the U-Men and Skin Yard, through the overturned punk and roll of Nirvana and The Gits, through the tough indie sounds of any band these days with bite and brains.

As Everett True said, "They are THE grunge band; and even then, they were really a punk band." That of course is the inside joke about grunge = punk, but back in the day when the awesome singles were released that lead this thick, deep 2XCD collection ("Touch Me I'm Sick," "Sweet Young Thing Ain't Sweet No More") I thought this would be another great underground band with a handful of songs I'd love and some incredible shows I'd never forget but we wouldn't expect much more.

Instead, the Superfuzz Bigmuff EP came out, and we knew it was the future of rock music, at least for awhile culturally; but aesthetically, it is immortal. Mark Arm, Steve Turner, Dan Peters, and Matt Lukin had put out a monster of a mini-album that expressed the band's timeless oppressed-and-pissed off energy perfectly: the way a bass would go for Pixies power-pop territory and then downturn in that nasty metal way, as a mid-60s style psyche-pop vocal would make some blistering social observation about addiction or lust or the brutality of cops. Like any great quartet of poor, drunk white punks, they cover their friends' songs (Sonic Youth's "Halloween") as well as weird but emotionally appropriate choices (Bette Midler's "The Rose"). It's like you're there between the amps of your favorite local neighborhood noise-mongers, bashing away at all the crap they had to put up with for the last 9 to 5 shift, amidst thrift store records and clothes, car parts, Taco Bell bags, empty weed sacks, ditched tall-boys, and wadded up duct tape.

I loved those singles and that EP and have always wondered why it's taken so long for a perfect package like this to be assembled, but it has, released simultaneously with their current masterpiece of beauty and terror, the perfectly-produced (hear those drums!) Tucker Martine-helmed The Lucky Ones {review}. The reissue's booklet, with humorous, very friendly history from Hinman and the legendary photographer Charles Peterson (whose Slits-inspired seven inch covers and publicity shots make the booklet alone in this little box set irresistible) is one of the best rock publications of the year. The fact that the EP, original songs from the 45s, and the story has been also graced with some remarkable early live recordings from Berlin and an in-studio at KCSB in Santa Barbara back in the day, well, makes this indispensable.

If you're a real rock fan, and not familiar with all this great material yet, and want to know how electric the band and its smart-ass little (at the time) label seemed back then, please don't hesitate to pick this up before the upcoming Sub Pop Festival in a couple of weeks. You won't be sorry.