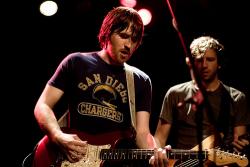 “What’s a nice way to word that no one is here?” I asked a concert go-er who had struck conversation with a friend and I. “Intimate” he said, decidedly. The gathering at the Showbox definitely started out intimate, but grew exponentially throughout the night’s trajectory.

The Austin three-piece, White Denim, cautiously walked on stage looking very aware of their surroundings. All caution, however, was clearly thrown out the room after the first song. These guys make a lot of sound for three dudes; I was taken off guard and completely blown away. White Denim was so fucking good: I think I’m just going to have to leave it at that. Lead singer James Petralli has one the most penetrating howls I’ve ever heard, and all three boast a mean falsetto. Bottom line: I’ve never been more impressed by an opening act.

“Leave me now in solitude and stress. I’ve been a better lover with your mother,” bleated the voice blasting out of an old friend’s car speakers. From the very moment I heard “Cowbell," I was hooked on Tapes ‘n Tapes. Naturally, I was ecstatic to see the group live for the first time, having missed their show with the Long Winters last year.

“I am so amped right now… whoa! Whoo! Whoo! Whoo! Whoo!” called the Minnesotan howler, Josh Grier, as he summoned the elders in the bar to the floor. Favorites played throughout the night included “Crazy Eights," “Jackov’s Suite,” and many more. The band certainly enchanted the pit’s thrill seekers that night, as Grier sprayed the front row with the spitting conviction of his words.

“I don’t need this, I already know what’s next!” bright eyed singer Josh Grier prefixed for one of the band’s closers, “Insistor” as he crumpled up the two-sided set list and chucked it behind him. Tapes n’ Tapes played a full hour and twenty minutes, so I knew that when they left the stage, they weren’t coming back on.

The members of Tapes ‘n Tapes all appear to have a mutual understanding of each other transcending friendship on stage. I can’t contain in words how amazed I was with their performance, so I’m not going to even try to elaborate. I will tell you however, that drummer Jeremy Hanson (Tapes 2) has mad drumming chops, and Grier's voice sounds even better live than on album. You absolutely have to see this band live. True story!