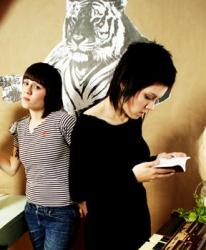 I’m writing this review the day that the final Harry Potter book is to hit bookstore shelves.

Easy Street Records is the closest thing to magic I believe in.

Where else can I get to chat with the Donnas, Kristin Hersh, and get the scorn of Lou Reed (which is a great story – if you ever see me out at a show, ask me about it)? It is also where I’ve also seen Franz Ferdinand, the Knitters, and, now Tegan and Sara. They’ve also brought Frank Black, Elvis Costello, Patti Smith and Regina Spektor by for free in-store shows.

When it comes to Tegan and Sara, the subject of this review, I’m a moderate. I like them fine, but in the scheme of quirky female duos, it breaks down like this:

CocoRosie: don’t get it
Tegan and Sara: like
The Ditty Bops: adore

I did immensely enjoy the band’s in-store show this Thursday afternoon. When I arrived at the record store, about 15 minutes before the show was to begin, it was already pretty crowded and felt like a sauna. All was forgiven, though, as the curtains (or in this case, metal garage door) went up at 4:00 exactly. Sara gave the crowd the chance to vote for the first song they play, out of four options, but quickly cut the voting off at the first song, which I believe* was “You Wouldn’t Like Me,” the first song off of their breakthrough 2005 record So Jealous. She explained that she wanted to play that song anyway and, besides, it was just as democratic as our electoral system (they’re from Canada) so we should be used to it.

For the first song, it was a little hard to see as both Tegan and Sara were seated, but fortunately they stood up for the rest of the show after that song. My view still wasn’t perfect from where I was standing (over by the “H’”s in the Pop/Rock/Soul section), but the show was enjoyable (and free), so there really is no need for complaints. The second song (and first one most people could see) was their biggest hit to date, “Walking With A Ghost,” also from So Jealous (and made even more famous when it was covered by the White Stripes). Those songs sounded good – they were stripped down, mostly with three acoustic guitars and a bass. Mostly that was the setup, although some songs had minimal percussion.

The show was a more playful one, with many of the songs getting messed up and having to start over. One explained that it was a rebellion against her piano teacher, who insisted that when you mess up a song, you should keep going and pick up where you left off. Despite a few sound issues – one monitor even needed to be turned off, the band still sounded great and it filled the whole record store.

The best part, though, was the dialogue. There was an obvious tension between the two (obviously – they’re sisters! Twins no less!), which probably explains why they live in different parts of Canada – one in Montreal and the other in Vancouver. At one point, Tegan said that Sara had a lobotomy that went awry about eight years ago, which is why she talks so much and won’t shut up. Then Tegan recounted the story of how she found it pleasurable to see her sister being whisked off the stage for exhaustion at Lollapalooza in 2005. I’m sure all of the sibling rivalry is part of their act, although this is the first time I’ve seen them live, but I can’t help but wonder how much of it really is based in jealousy or competition.

When it was all said and done, the band was on the Easy Street stage for about 45 minutes and played eight songs, including favorites from the previous albums as well as songs from the forthcoming LP The Con. It was a very good show and it confirmed my suspicions that it was foolish of me not to get tickets to either of the shows at the Triple Door (Wednesday and Thursday nights), which presumably were a little tighter and longer. Regardless, this was my first Tegan and Sara show, but it won’t be my last.

* They made me check my bag when I walked in the door and I forgot to grab my notepad, so this review is all from memory – and written after a karaoke birthday party for two friends. That’s the level of professionalism you can expect from me!