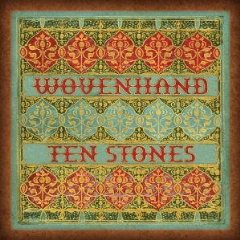 Religion in any form or context is of great disinterest to me. Typically, I find it to be a hollow exercise for the vulnerable, ashamed, damaged, troubled, battered and/or tormented. The moment is infrequent when I encounter anything in the non-secular realm that moves me, particularly if it is steeped in the narrowly defined tenets of Christian spirituality. David Eugene Edwards, the lead singer and songwriter of Wovenhand and formerly of 16 Horsepower, conjures one of those rare exceptions. Ten Stones is the fifth release by the former and put simply, it is another storming collection of gothic, rootsy brilliance.

Often, when listening to 16 Horsepower, I think to myself that their records are superior to those by Wovenhand. In actually, and by all measurable accounts, they are not better. Rather, they are different beasts. A large portion of the Christian references in 16 Horsepower lyrics seem almost tongue-in-cheek, more akin to Slim Cessna’s Auto Club without being quite as irreverent. Edwards channels a psychotic fire and brimstone preacher, but you don’t quite think he is for real. With Wovenhand, however, there is a more darkly serious and sinister vibe to the material that is heavy and intense. Here, the crazed preacher bit doesn’t seem like an act. Any inspirational humor that brought levity to 16 Horsepower is replaced by raw devotion. The music and particularly the lyrics of Wovenhand hold no degree of circumvention. Here, it is all on the table and it is real. The current David Eugene Edwards seems interested solely in embracing an austere musical and artistic forum for his apocalyptic views.

Concerning Wovenhand, Ten Stones is a little different than it’s predecessors. There is a bit more experimentation in the song structures. For instance, the arrangement on the classic Sinatra song, “Quiet Nights of Quiet Stars” sounds like something out of a 1960s James Bond film. The very choice of this song for inclusion on the record is perhaps even more startling. Another track that took me by surprise was “White Knuckle Grip,” where Edwards puts on his best Southern evangelist impression. Here, he raves and rants in one of the lighter, but no less interesting pieces of music on the record. Organs playfully pump and a slinky bass line roves in circles behind the possessed siren of his vocals.

Much of the album covers familiar territory. "Not One Stone" is cadent and menacing. The bass chugs along like an early Bad Seeds song while a tortured Edwards bellows the words "Behold the lamb/Given for us/Made curse for us." There is also the short and sweet beautiful garage punk sound of "Kicking Bird" where he poetically belts out the lines, “The songs begin at nightfall/The wind blows to the north/The wind is blowing stronger/It blows my tail to the north.” In just over two minutes the song comes to a close when you are waiting for another verse.

This is an album of disturbing and harrowing spirituality, and reminds me that like cathedrals and devotional paintings, great art can emerge from the most peculiar beliefs. Ten Stones is a dark, obsessive basin of religious lunacy. It is neither gentle nor soothing, but the stuff of an esoteric rural cult instead of that of a suburban megachurch. Yet the conviction is astonishingly real and in this instance I can say that I am a devout fanatic.