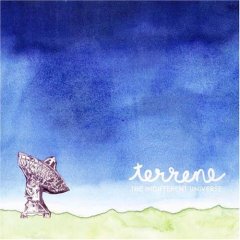 If patience is a virtue, then John Dylan, the singer, guitarist, and founding member of Terrene, ought to be knighted by now. What began as a solo project in the late nineties has quietly blossomed over the past decade into an exquisite work of art. With a complete band now in tow and a label finally at the helm, Dylan is finally ready to release his work in full-length form, and as any of Terrene's loyal fans can tell you, it is a long time coming. To put this into context, on June 30, 2000 Dylan's "Fifty-One" was Spin Magazine's "Cool Track of the Day." That was seven years ago, folks, and today a refined and expanded version "Fifty-One" is poised to be the first single off Terrene's brightly polished record, The Indifferent Universe.

The word "terrene" may mean "of or relating to the earth" but Terrene, the band, sounds anything but earthly. The echoic guitars chime beautifully with soaring harmonies whirling in from all directions, and every sound is obscured lightly by a lucid haze of reverb, giving the music a very nebulous quality. Attempts to pigeonhole or compare Terrene's sound with established genres and artists usually result only in Frankensteinian conglomerations of eclectic bands — a tooth of Sonic Youth, a couple toes of Sigur Ros, a Flaming Lip, maybe a few Blonde Redhead hairs sticking out somewhere, etc. — but these stitched generalizations do no justice to the ten years of songs (some copyrights date back as far as 1996) underneath the sheen of two years' worth of production.

Of the thirteen tracks on this record, the only ones I find myself skipping past are the untitled interludes which have been inserted between some songs. "Fifty-One" is catchy as hell, and it showcases Terrene's strong points of good songwriting, aural expansion, and instrumental harmonies right off the bat. The 8-bit video game sounds and keyboard-led melodies of "Unwelcome" are giddy, danceable, and just plain fun to listen to. "The Spirits On The Shelf" is breathtakingly moving, with a backdrop of soft mandolins and violins keeping the emotions aloft.

From a songwriting perspective, the strongest track on the record is "Media Sift (Through Heart Rises)." The song begins with a simultaneous crash of instrumentation, layered with high-tempo rhythms and low-tempo chord progressions over which Dylan's resonant vocals and nostalgic lyrics are stretched. After what seems to be a verse, the song leaps into what seems to be a chorus, but before long it becomes apparent that there is no sense turning back. Every few measures the song grows an increment, the melodies expand to make way for more melodies, and the sphere of harmonies augments. Finally, once it reaches its own apex, Dylan concludes the lyrics with the line "Each wake leaves every dream unsure, to media sifts and nothing more" and the song vaults into a final hurrah before exploding into a hushed fallout of dissipating guitar plucks. The most notable characteristic of this song is how naturally it abandons the standard verse-chorus-verse-chorus structure in favor of a linearized, progressive structure. In this sense, it never retrogresses or becomes redundant, even as some elements of the percussion, guitar harmonies, and vocal lines remain consistent throughout.

The Indifferent Universe, though very well composed, is not without its flaws. Terrene has been sitting on this egg for years now, and they have fallen into the pitfall that many bands experience while waiting for it to hatch: overproduction. Not to discredit the efforts of John Dylan or his notable co-producer Phil Ek, whose collaboration of Dylan's innovative style and Ek's impeccable expertise make for a crystalline and professional veneer to cover the music with, but with each layer they add to the songs the existing layers become more and more opaque. Though this sense of opacity is important to create a certain overwhelming aura, the effect of overproduction waters down the lyrics to the point of unintelligibility for a large part of the record, and it homogenizes the songs more than is necessary to create a sense of coherence. This criticism isn't coming from speculation either — it is coming from somebody who has not only heard older versions of several songs, but who actually listened to the previous version of "Media Sift (Through Heart Rises)" almost religiously on daily Metro Transit treks last school year. When I first heard the final version of that song on this record, I couldn't help feeling that the shiny new model I was hearing had betrayed many of the songsmith's original intentions, welding the hood shut and preventing the listener from understanding the marvelous inner workings of the music.

While the production may be a little overdrawn, they had the right idea in mind. Terrene's music is at its best when the listeners can look up at the panorama of the night's sky and feel that the music they are listening to is as mystical and expansive as the heavens above them. They have mastered the merits of musical complexity, and the next logical step forward might be to find the merits of simplicity so that the two can be juxtaposed to full effect. Terrene is a promising star, and one to watch for. If they can continue to grow, today's red dwarf might be tomorrow's supergiant.