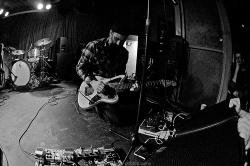 Veteran post-rockers The Appleseed Cast, hailing from the hot bed music town of Lawrence, Kansas headline their tour in support of their sixth studio release "Sagarmatha" on label The Militia Group.

At first, the thoughts I had going into the show was what songs they were going to play. You can pick a range of epic songs from Mare Vitalis (Deep Elm, 2000) to Two Conversations (Tiger Style, 2003); and Peregrine (The Militia Group, 2006). Then I thought to myself, since it was a record release the band is going to play mostly the new album. How will the old songs mix in with the new songs?

As for the new songs, yes – "Sagarmatha" does not dissapoint. Long time fans familiar with the more catchy vocal, structured melodies of Peregrine and Two Conversations and the experimental tendencies of the Low Level Owl records will understand and appreciate the fresh maturity the band has taken with this release. In some ways, you're biased because you know it's the Appleseed Cast as they can't disappoint and then on the other hand you compare their current work with former releases.

The first impression of "Sagarmatha" for me was like listening to Explosions in the Sky as "Sagarmatha" is for the most part instrumental with scattered vocals that just envelope you to the whole. It's one of those releases that can be the epic spring/summer road trip soundtrack.

Predicatably, the band played mostly their new songs. The crowd yelled out the usual praise and cheers when the first few bars of a familiar song came on. After a few songs, Aaron Pillar regrettably announced that they did not have their new album for sale yet. Who starts a record release tour with no albums for sale? Pillar just said to send all hate mail to the Militia Group. After the last song and during the brief pause before the encore, I was thinking they still haven't done "Fight Song". The entire set thus far was amazing and solid and the encore was still coming.

I went back in thought on the word "Sagarmatha" and it is Nepalese for Mount Everest. The album doesn't draw any comparisons to the highest mountain on earth but in listening the sounds of the entire album and watching their live show, it's definitely an inner trek worth exploring to the highest.

Fishing in the Sky
Fight Song
The Road West