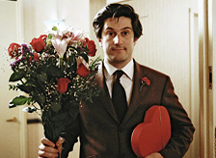 "Before you say any more you need to know that I am also reading the dictionary."

It seems a bit churlish to pick at a movie as sweet as The Baxter, even if it is a little flawed. The directorial debut of writer and actor Michael Showalter (familiar to many of you from The State, Stella,Wet Hot American Summer) is rough around the edges and possibly a bit forgettable, but it's also refreshingly charming.

According to the film, a "Baxter" is the archetypal Wrong Guy, the guy who gets left at the altar for the Right Guy, who usually shows up just at the last second during the "speak now or forever hold your peace" part. Showalter plays the titular Baxter, a man named Elliot Sherman who's an accountant straight out of Central Stereotyping. He's precise and meticulous, makes dweeby jokes, never goes outside without a hat, and appears never to have taken a risk in his life. One day he meets Cecil Mills ( and Michelle Williams, luminous as usual), a woman who's sweet and quirky and geeky and designed to be perfect for him. A few moments later he meets a richer, more beautiful woman named Caroline (Elizabeth Banks, who I recognized from the funniest part of the 40-Year-Old Virgin preview) who's clearly NOT right for him, but because she's both obviously out of his league and inexplicably interested in him, he doesn't even consider resisting. Before long they're living together, then engaged, and the rest of the movie plays out the inevitable realization and transcendence of Elliot's innate Baxterhood.

The cast is excellent, including Showalter's cronies Michael Ian Black and Zack Orth as Elliot's odd friends, and Paul Rudd as Cecil's jockish boyfriend. The fantastic Peter Dinklage steals every scene he's in as the sexually ambiguous and highly discerning wedding planner, and Justin Theroux does an admirable job keeping his Right Guy character from being too silly.

The comedy bits work great — Showalter has a great ear for timing — and though the plot is predictable, the scenes that get you there are not. Showalter wrote some very funny scenes and appears to have let his actors really run with them.

My main quibble is that it's hard to see what either of these girls would see in Elliot as a partner. I can believe Cecil at least liking him as a friend, but Showalter focused on making Elliot a funny character and forgot, I think, to make him someone we'd root for beyond our default desire to root for the underdog.

There's a long tradition of comedic romances, going back to Charlie Chaplin, where the asexual hero gets the beautiful and underestimated girl, but the hero should be more something than the louts that are his rivals. More sweet, more funny, more resourceful, more attentive.

Elliot does appear to be more appreciative of Cecil's charms than her boyfriend is, but mostly he's just more geeky, and the rival louts aren't really that bad, nor is either set up as much of a rival. That is, it's always clear who's supposed to end up with whom.

I think part of the problem is that Showalter plays Elliot too old. Cecil and Caroline both appear to be in their mid-to-to-late twenties (as both actresses are), but Elliot seems to be in his early 40s going on mid-50s, which seems too old for either of these cuties even if he weren't so boring. Neither of them seems old enough or desperate enough to settle for this guy.

But whatever. The movie made me laugh. Can't argue with that.