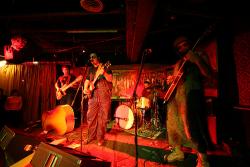 The Beautiful Clarks at the Sunset

I'm listening to every song in my iPod alphabetically; better yet, I'm taking my co-workers and clients hostage and playing it daily at work. Out of thousands of songs (we're on day 8 and just at the start of the letter "D") only one thus far has stopped anyone dead in their tracks. Amidst all that the letter "B" had to offer, the Beautiful Clarks' "Bended Knee" came on in all its heart wrenching glory. A flurry of questions came about 30 seconds in.

"Who is this? Where are they from? Where can I find it?"

Trying to explain that they were, indeed from Seattle, and that a full-length was rumored to be in the works, I could tell she was ultimately disappointed with the fact that I couldn't hand her the songs right then and there. It's a bit misleading, however, to refer to the Beautiful Clarks as a 'Seattle' band. Their Americana sound comes a bit more authentically via Memphis, former home of frontman and songwriter Billy Hatcher. 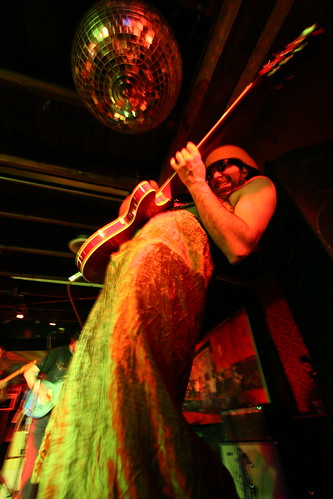 Prior to this most recent show, it had been (sadly) over a year since I last saw the Beautiful Clarks play. That night at Chop Suey was memorable enough that I immediately asked Hatcher how I could acquire more of their music. The four-song demo online is perfect in all ways but one – ultimately, it's only four songs. Producer Kory Kruckenberg recently posted some good news on that front, though, and it looks like a full length is not long away.

Given that it was a Tuesday night, I expected the Sunset to be at least a bit subdued. To my surprise, I walked into a nearly full venue and a crowd of animated show goers. Of a four-band bill, I must concede that the Clarks were the draw for me. Today! opened the show, while Celebrity Orphans played just before the Beautiful Clarks. Only their second to last song seemed to indicate that the bill made sense; most of their set was unremarkable, like that of a rather likable bar band. There was much yelling of "Tuesday!" in the crowd, and self-congratulatory cheering for this achievement. The crowd hollered at the end of a song and the lead singer howled right back. An excellent bass player and the occasional hint of blues salvaged the set.

Fittingly enough, Hatcher began the Beautiful Clarks set with "Bended Knee." He played it solo, just his voice and a lap steel. Wearing overalls and spectacles, sporting a well-coiffed mustache, he looks the part of a southern gent. His voice is soulful beyond his years, still clear and strong. The rowdy venue was nearly silent throughout the song. 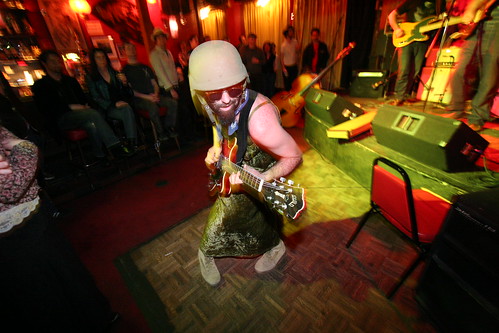 When the rest of the band joined him onstage, including drummer Dan Phelps and bassist Chris Benson, guitarist Caleb Sparks came fully dressed in work boots, WWI helmet, and a long velveteen dress with spaghetti straps. At first the dress seemed like unneeded showmanship for a band of their caliber. It occurred to me halfway through the show that it's actually quite (forgive the pun) fitting. With Americana running rampant as a genre, stunts like the dress gives them an air of silliness, a lack of self-concern. Ultimately what could be a mere gimmick makes it clear how genuine they are.

Hatcher's lyrics created landscapes, ones full of longing and heartache. He sings of "barges singing" and perfectly evokes fall with a simple description of "red and yellow leaves." The line "how I lied to you" was delivered with a mischievous grin. Rather than seeming sinister, it's simply comical; Hatcher's face made it clear he couldn't resist smiling. His voice rolls across that line like a drunken confession. The accompaniment matched each picture in tone and soul. My plus one pointed out there were no tuners onstage; Sparks and Hatcher simply bend the strings to arrive at the right note. 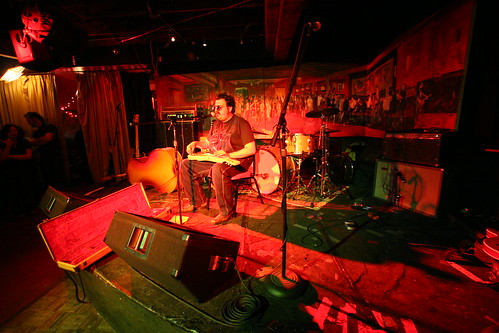 By the last song the band was in an uproar. Hatcher seemed gripped, one eye askew and head shaking side to side with emphasis. Sparks stepped off onto a speaker and out into the crowd. The sad announcement had been made that Sparks is soon returning to Memphis, and as a farewell that last song broke into a surreal second half where he himself started singing lasciviously. If goodbyes had to be said, it was a damn good way to go about it.

Despite Sparks' departure, the Beautiful Clarks will continue on with Chris, Dan, and Billy. Hatcher confirmed via emailed yesterday that they'll soon head into Avast with Kory K. I should be done listening to all my songs alphabetically just in time to talk him into sneaking me a copy of the rough mixes.