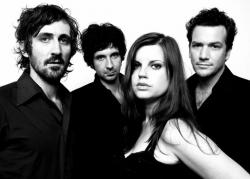 The Drones grace the Tractor Tavern

The Drones were formed by two musicians wanting to get the hell out of Perth, Australia. Perth is isolated by by the Indian Ocean on one side and the vast bush of the entire Australian continent on the other. Guitarist/lead singer Gareth Liddiard and guitarist Rui Pereira fled Perth eastward to Sydney and then onto Melbourne to form The Drones with Fiona Kitchin on bass and drummer Chris Strybosch (later replaced by Mike Noga).

Their music recalls the isolation of the metropolis they grew out of; gritty and fierce with a touch of desolation. Especially in their quieter moments a sense of extreme spareness permeates. You hear open spaces in their guitar-heavy style and a vocal tendency that exhibits Suicide and Bad Brains-like influences. Most of the songs in their near two-hour set went from hush, whispery melancholy to angular feedback-based solos in an instant. The transition was at first a little jarring, but about 3/4 of the way through their set they really hit their stride. Bassplayer Fiona Kitchin was apparently shy, because she stood with her back towards the crowd the whole show, steadying the band with her healthy walking basslines.

Gareth's creepy hiss leads you around dark corners and then smashes you in the forehead with an aggressive and ramshackle punk rock delivery. Though their namesake, drone, is present in their songs they rely more on forward-moving methodical noise. Punk and greasy garage are building blocks of their sound, lending equally to fellow countrymen The Birthday Party and to Neil Young's more wayward, blistering solo work. Just when I thought one of their songs was on its last leg another feedback-induced fuzz out ensued. The Drones were relentless. I'd say more than half of the content of each piece was a dual guitar wank-off, two skilled ax-men tweaking knobs and ladling out dense layer after layer of splitting solos.

The one major qualm I had about their set was the fact that after their last song they left their guitars wailing feedback and walked offstage, presuming that the very sparse 35-40 person crowd would cheer them into an encore. Now, I'm not completely against encores, but I think the essence and true purpose of an encore has been lost in the modern day world of concerts. Every band does not deserve an encore, nor should they expect it. The Drones put on a solid, deafening show to be sure. Was it encore-worthy? In my opinion, a resounding NO. Despite my disbelief and annoyance at their encore plans they played a thrashing, and thoroughly inexact, revised version of "LA Woman" that was quite good.

Regardless of the attendance, the Drones didn't lack energy. They were polished, heavy, and brutal in a very graceful way. I'm looking forward to hearing their new Australian release out September 20th, entitled Havilah.