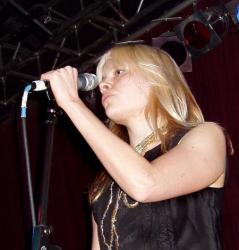 The Duke Spirit, Live at Neumos

As part of KEXP's Spring fundraising event, The Duke Spirit paid us a visit here in Seattle, all the way from London (and part way through a US tour). The show was a fundraiser for the station and also celebrated DJ John Richards' birthday.

Experiencing The Duke Spirit perform, one is instantly reminded of glorious punk pop darlings Blondie. Singer Liela Moss very much resembles Debbie Harry circa Parallel Lines with her onstage style and platinum dyed hair. The musicians in the group display a sound that recounts Blondie as well, with their brand of indie Brit pop, particularly with the keyboard groove mixed low at the soundboard. What came across in their live set was a vampy chimera of Blondie and Joy Division. The prominence of their rhythm section is reminiscent of the latter, with the use of punchy bass lines and sharp drumming. The guitar sounds, on the other hand, hearken back to the new wave playing of Chris Stein.

Imaginary staffer Diana Salier wrote a great review of a recent show of The Duke Spirit in Williamsburg, VA, and their performance in Seattle lived up to her praises. The band rides on the energy of Moss at the forefront. She commands a physical presence while belting out edgy vocals, which are tinged with a bit of Siouxsie Sioux and Shirley Manson at times. The stronger songs in the set included harmonica playing by Moss. The show was limited to about 45 minutes and it went quickly, including some new songs that they have been performing on the road. They were also giving away a promo CD that included two songs performed live in London from their new album, Neptune, which were also performed live in Seattle: "The Step and the Walk" and "This Ship was Built to Last." It seems fair to say that John in the Morning must have had a great birthday, in part because The Duke Spirit were in fine form.