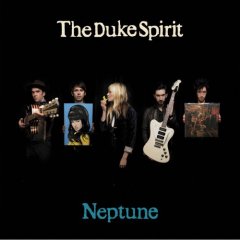 The Duke Spirit’s latest release Neptune takes the sound from their previous release and joins it with stellar songwriting and solid themes that make a mockery of the sophomore jinx. Leila Moss’ voice retains its haunting quality and the band is more than capable of creating intensity, but they didn't really have a signature song or style on their first record, Cuts Across the Land; however, the new record proves that The Duke Spirit are more than just rock-out artists and that they are real songwriters and performers. Neptune has made me go back and listen to Cuts Across the Land and notice subtle stylistic differences between the two projects.

A friend of mine professes that the third track on a record should always be the 'hit', and The Duke Spirit keep that theory alive and well with “The Step and the Walk” which happens to be one of my favorite songs of the year. It’s haunting, soulful and moving. Producer Chris Goss’ work is masterful in that what was before a wash of noise is now a discernible chaos full of minute details that the listener can easily pick up on. Despite first hearing this song months ago I still routinely wake up with it in my head. “Dog Roses” also shines through on the record with its dark, maritime feel which keeps in step with the theme for Neptune: water. The lilting feel and percussion work well together creating a dense and dark emotional song that leaves you wanting more after Leila tells you that “there’s nothing there.”

The Duke Spirit are capable of much more than crunching guitars and overpowering distorted riffs and they prove this with “Wooden Heart.” It’s a broken lullaby of sorts with a repetitious quality that lulls the listener into a groove and then breaks, and it has a great build to the end giving the song a nice arc. “My Sunken Treasure” has a familiar quality that kinda reminds me of Oasis and Billy Joel at the same time (I know, I need to get out more). The instrumentation works great with the progressions giving it a classically British sentimental feeling. “Lassoo” continues the driving rock formula that works so well on this record utilizing a straightforward four-on-the-floor beat, great builds and and Moss' brilliant voice creating urgency leading to a final freak-out.

Neptune is a fantastic step for The Duke Spirit as it presents a more palatable band with firm ideas and direction. Depending on what you are looking for there are at least three songs worthy of long-term time on the old mp3 player. The record as a whole is also more coherent and not as chaotic as their first effort which gives the project a more solid feel and at the end actually feels like a journey you’ve been on with the band. Neptune may be one of the best rock records released so far this year.