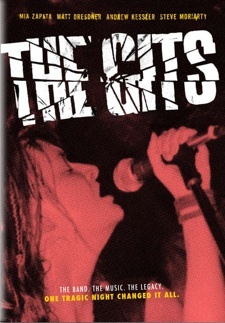 The Gits documentary to play NWFF

The Gits were and still are easily one of my very favorite Seattle bands. Dynamo lead singer Mia Zapata was everything punk-blues promised by bands usually from Los Angeles or Berlin. You may be familiar with the tragic story of Mia's murder and how it chilled the Seattle music scene (and general community at large) but wondered about how it could have happened and why it was so devastating.

Thankfully, first-time director Kerry O'Kane has documented this tremendous, heart-breaking story, and Seattle audience will be able to find out more about it and some of the most powerful Pac NW music ever recorded when "The Gits" plays at the Northwest Film Forum between July 4th and July 10th. (It's actually making the rounds nationally, and will be playing Portland at the Clinton Street Theater on the same week.)

Every time I pass by that gas station on Broadway where she got in the cab I still get chilled, and though this will probably be very upsetting to experience (and I am almost hesitant to do so), it will be worth it all just to hear that amazing music again, and to see Mia working the crowd like the love daughter of John Lee Hooker and Exene from X.

Thanks to O'Kane, Liberation Entertainment, and It's Alive! Media for helping to remind us all what we had so very briefly, but which has had a tremendous influence on us all (even those in the Seattle music scene who might not realize it).