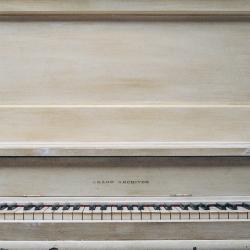 Rising out of the ashes of Carissa's Wierd, and of Band of Horses more recently, Grand Archives gives us an intimate and promising debut on Sub Pop. This Emerald City quintet is shedding the forlorn idealism of some of their other projects, and instead are responding to, and propelling, their progress with a sense of hope and high spirits. Formed by Mat Brooke with friends Curtis Hall, Jeff Montano, and Ron Lewis, and later joined by Thomas Wright, Grand Archives are hell bent on banishing the darkness and stepping into the light.

Powered by illuminating pop and blunted by a Low-esque barrage of harmonizing vocals, Grand Archives are steadfast in their sound. They seem to know exactly where they've come from and exactly where they want to be. "Torn Blue Foam Couch" starts off as a ballad and comfortably ascends into a confident and breezy track. Muted brass and a sunshiny vibe make this an excellent appetizer.

Sounding a bit like a contented Archer Prewitt song, "Miniature Birds" brings us summer in a song. A down-home harmonica accompaniment coupled with cheery whistling and belting horns just melts my heart right into a puddle. When did Mat Brooke get so good? According to many Carissa's Wierd fans, he's just always been that way, and judging by this earnest album he won't be changing his ways anytime soon.

"George Kaminksi" drips like dark molasses out of Mat Brooke's mouth. Plaintive and stripped down, this track really showcases Brooke's heartfelt songwriting. "George Kaminski" references an incarcerated man who once held the record for collecting the most four-leaf clovers. For such a charming subject matter, this song sure does tweak the heart. Though a lot of the tracks hit the melancholy mark, there is an optimistic tinge to the whole album. It's well crafted, pieced together seamlessly and a thoroughly enjoyable record. That being said, there is a repetitive quality to these songs as well. Grand Archives have dug out a specific style and stick with the winning formula, which makes for a consistent but slightly arid selection.

The most standout track, in my opinion, is "Sleepdriving." It washes in and out, lulling with near perfection. The harmonies click together effortlessly to create an emotive, warm track. This is virile, real pop sung like it means something. Normally I'm not a fan of lots of strings in pop music but Sarah Standord's violin addition really sets the tone for this song. The organic, elegant lyrics that are repeated at the end of the song are heart-wretchingly beautiful — "Outside those crows in lines on those frozen roads and wire, sleepdriving away…"

Picking you up off of the floor and slapping you back into action, "The Crime Window" blows in with shouting lyrics and piano-banging rock. Grand Archives wouldn't dare leave you in a huff, despair dragging you down into the depths. Instead they finish with charming trombone and lilting vocals on "Orange Juice," which is a short track but an apt ending to a truly well made record. Ben Kersten, of Mysterious Red X Studios, really did a hell of a job producing this album and putting it together.

Though I hear Crosby Stills Nash and Young and a little bit of Polyphonic Spree sprinkled throughout, Grand Archives make their own special kind of blithe, atmospheric pop. The cover art on this album is delectable… the music is rich and engaging…. and I think next time I see Mat at the Redwood I'll tell him so.