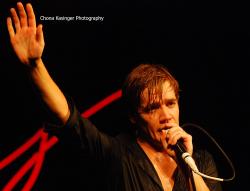 The Hives at the Showbox Sodo

For those of you who have never been to the Showbox Sodo: that place is a pretty sweet venue!

Local Bainbridge Island band Holy Ghost Revival got the night started off right, with lead singer Mikko Freeman frequently jumping into the audience and surfing around the crowd. Their sound is a self-professed combination of metal, folk, and powerpop, as classified by the band’s MySpace page — and joke or not, the description sounds about spot on to me.

"Legendary bar band" is the vibe I get when I saw the Donnas perform on stage (in no way is this meant to be derogatory!). The heavy (occasionally delving onto slightly metal grounds) pretty girl quartet definitely proved themselves to be the best all-girl live band I’ve ever seen. All-girl bands these days are far and few and at the expense of sounding totally cheesy, the Donnas rocked. How often do you catch a female lead guitarist shredding the hell out of her guitar while head banging and singing? Seriously, I think Allison Robertson is my new hero. The audience went wild during the set.

The Hives are band I’ve been waiting to catch live for years. For those of you that missed the sold out show, I highly recommend catching them at Sasquatch later in May (along with all the other brilliant bands performing). The Hives have had a lot of hype over the years, and my standards for their performance were high. Somehow, I knew I wouldn’t be disappointed and I was most certainly right! Howlin’ Pelle Almqvist owned the stage like a master, with the sex appeal of a hundred male Swedish models and the shriek of a caricature banshee.

I am hard pressed to describe the show in words, so I’ll have to let the pictures speak for themselves. Bottom line: do as I was told and do whatever you can to catch the Hives live in concert. They will melt your pretty little music minds!