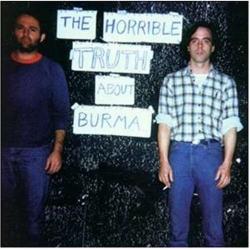 The Horrible Truth About Burma

The importance of the first batch of recordings by Mission of Burma is something that should not be overlooked. Their jagged artful rock burst onto the Boston music scene in the late '70s like a cluster bomb, and their scant early discography (two 7"s, one EP, one studio album, one live album) further cemented their legacy as one of the finest bands to emerge from the post-punk world.

The good people at Matador have seen fit to bring back into print the documents of Mission of Burma's early years, reissuing and remastering Signals, Calls and Marches, VS., and The Horrible Truth About Burma, and including new bonus tracks and DVDs of era-appropriate live performances.

All of these discs are absolutely essential for any right thinking music fan — not to mention the two albums the band has put out since their reunion (also on Matador) — but the live disc, The Horrible Truth, is probably the best document of what this group was capable of.

The power and incendiary fury is palpable on this album, as well as a fearless abandon with which Roger Miller (one of MoB's three singer/songwriters, alongside drummer Peter Prescott and bassist Clint Conley) attacks his guitar on every song here. This is never more apparent than on a track like "He Is, She Is" where Miller's tones sound like bent radio waves amplified, or the sheets of thrumming anger he spills out on the band's run through the Stooges classic "1970."

This live recording also helped bring to light the contribution of the band's fourth member, Martin Swope. Sitting offstage, Swope would be both mixing the live sound but also manipulating it, using tape loops and effects boxes. The result is bits of songs and sounds being warped back through the PA system, adding an avant garde element that fit with the pure rock/noise side of the band with surprising ease.

Swope's work is all over this album, with bits of tortured vocals and guitar squalls looping back on the band, as well as bits of noise and samples bleeding into the already full mix. 23 years later, the effect is still stunning and frightening in equal measure.

With Mission of Burma reunited and making recordings as urgent and groundbreaking as their initial efforts, the band now seems unwilling to spend much time looking backward. But don't let that stop you from doing just that, by giving these seminal recordings your full attention. The past never sounded as good as it does here.