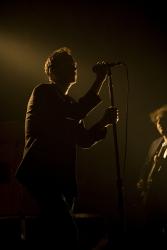 I was extremely excited when I heard that The Jesus and Mary Chain were coming to Seattle for the first time in ten years, but I also felt some disappointment when I learned they were performing at Showbox Sodo, a venue in Seattle that is often susceptible to tin can acoustics. Luckily I can report that the band played an excellent show despite sound difficulties, both venue and equipment related.

Local Seattle band, The Turn-Ons, opened the night and proved to be an appropriate musical fit. With three guitars, bass and a fine drummer, they created an impressive psychedelic wall of sound that is not at all dissimilar to shoegaze legends Ride, circa Nowhere. Their brand of layered noise set the stage well for The Jesus and Mary Chain to then come onto the stage a drop their feedback-entrenched melodies upon the eager audience.

It was an evening of typical deadpan cool Mary Chain. Singer Jim Reid rarely interacted with the crowd and the rest of the band hardly broke free from their statuesque stage presence. The group did seem the slightest bit rusty at the beginning of the set when they opened with two songs from their acclaimed debut album, Psychocandy. The songs, “The Hardest Walk” and “Taste of Cindy” energized the crowd almost immediately.

They emerged after a decade away from the Northwest a little bit stiff, but after moving through a few songs they sounded more comfortable. As the band warmed up to the stage they performed songs from all of their studio albums except for the acoustic based Stoned and Dethroned. There was the funky 60s garage pop “Far Gone and Out” alongside more popular tracks such as “Head On” and “Happy When It Rains.” A few unpredictable songs made it into the concert as well such as the fantastic grunge blues “Snakedriver” and “Some Candy Talking,” an early non-album single with primitive Velvet Underground style drumming.

There were no new songs debuted during their performance, which was a bit of a disappointment, but they did play a couple of newer songs that have turned up during the last two years. One of them, “Dead End Kids," was a song that Jim Reid performed solo and released as a single before the reformation. As a Mary Chain song, it now boasts a grittier sound. The one truly new song co-written by the Reid brothers, “All Things Must Pass,” was included at the end of the set and it sounded as good as classic Jesus and Mary Chain material.

There were some technical problems that forced the band to cease its singles-heavy set for a few minutes in which Jim exclaimed, “This is my fucking nightmare!” After some moderate heckling from the crowd they continued with another song, but had lost a little momentum. Once the issues were sorted out they finished the show with their best-known song, “Just Like Honey” and after a very short break came back to encore with one song, an extended blistering rendition of “Reverence,” which was the highlight of the evening. Their entire performance lasted almost exactly one hour, even with the encore, but was well worth the price of admission.