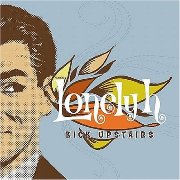 Kick Upstairs, the debut record from local upstarts The Lonely H, is a smattering of sounds created by four Port Angeles teenagers that shows plenty of potential and marks the official entrance of another promising young pop band into the Northwest scene.

Singer Mark Fredson's vocals are straight out of the Rivers Cuomo school and his bandmates — guitarists Eric Whitman and Colin Field, drummer Ben Eyestone and bassist Johnny Whitman — do a solid job of making his wildest "Surfwax America" dreams come true on tracks like "Ken" and "Electric Change." However, as closely as Fredson's voice comes to mimicking Harvard's resident geek-chic rocker, the album both shines and falters when he forges his own identity as a frontman on the tracks that are non-Weezer soundalikes. One such track is "Marmalade Sky," a song that doesn't come close to living up to its titular Fab Four reference.

On other songs, it's tough to gauge where exactly Fredson is going with his vocals, damaging the debut with his inconsistencies. On one hand, you've got pop songs such as "Don't Worry" and "Family Friends," two shiny gems of 14-carat indie-pop proportions, and on the other hand there are the lackluster aforementioned rockers. Somewhere in-between are tracks like "Sweet Madeline" and the polarizing "Draconious," the latter song being a track that could either draw listeners to The Lonely H in droves or disappoint, because it's such a departure from the other 10 songs on the disc.

In the end, the record's inconsistency is more endearing than it is faltering. The record's closing song, "Zelda," show The Lonely H for what they are: a group of musically-talented teens who are having fun playing music together. The group's immense potential is obvious, and their enthusiasm is heard all over Kick Upstairs. The band aims to remind listeners that music should be fun to listen to as well, but it never quite maintains an agreeable flow of consistency.

This makes for a decent debut by a group of kids that likely listened to Weezer's Blue Album one too many times, which isn't necessarily a bad thing. You get the impression that once Fredson nails down his vocal issues the band will follow, making The Lonely H a cohesive and tight-knit force of indie-pop to be reckoned with.