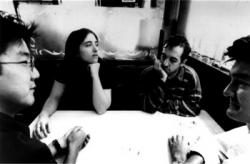 the sleepwalker February 20, 2008 no Comments

Almost 10 years ago, I experienced my first Magnetic Fields concert. I will always remember how I was blown away by the band's relaxed and completely unpretentious charm and wit. The real treat of a live performance by the act or any of its polyonymous permutations, however, has always been the vast differences between the live arrangements and the recordings. While it is true that the band's big breakthrough album, 69 Love Songs, is mostly an organic record, the band's earlier albums, which I cherish and enjoy, were often riddled with terrible production, poor performances, and strange sonic choices. Merritt even asked guest singers on the first 6th's album, Wasps' Nests, to sing like they were bored. Therefore, more so than for any other band, these live experiences, without the imposition of production or questionable performance guidance, have always been very precious to me.

Despite the commercial success of 69 Love Songs, the always enigmatic Stephin Merritt took it upon himself to challenge (perhaps read: alienate) his label and fans by working on Chinese operas, children's songs, and most recently, Distortion, an album of pop songs with the production style of Jesus and Mary Chain imposed upon them. The album has polarized fans, some viewing it as a triumphant return to the traditional band form, others crying "Judas" at the sonic departure from predecessors 69 Love Songs and i.

Whether or not the recorded work Distortion deserves praise or condemnation for its aural washout, the present tour focuses on showcasing the songs without the production impositions. In this setting, the band provides nothing but simply arranged, acoustic renditions of its work. Perhaps this even surprised some listeners, with one shouting "Where the fuck is the distortion?" Without a blink, Stephin informed us that both literally and metaphorically, "it's available in the lobby."

Merritt sang the majority of the songs, usually while playing an instrument I can best identify as a lute. He was supported by his regular Fields: Sam Davol on the cello, John Woo on the acoustic guitar, the ever-talkative (in a very good way) Claudia Gonson playing piano and contributing both backing and lead vocals. The usuals were also joined for both lead and backing vocals by 69 Love Songs alum and Distortion contributor Shirley Simms.

The show itself included a varied song selection, heavily favoring work from Distortion and i, but also including obscurities and oddities like The Gothic Archies' "The Tiny Goat" and The Eban and Charley Soundtrack novelty "Water Torture." Even if I had wanted to influence the song selections by shouting requests, Stephin responded to the first called song by letting us know that "bands who take requests suck…that's why they have to take requests."

Although the set omitted much of my favorite older material, the opportunity to hear so much of Distortion without the distortion was really wonderful. The performances of the players and singers were exceptionally good. The banter between songs was both charming and hilarious. Claudia Gonson, the most talkative of the bunch, told stories against which Merritt fired his grumpy, monotone quips. Merritt and Gonson, collaborators since the band's inception, have always presented as comic foils acting out between-song interplay. One might even say that they are the Burns and Allen of intellectual pop music.

In the past I had often viewed Shirley Simms as an intruder, stripping vocal duties from the far superior Merritt. Her humble, subtle performances at this show were far more enjoyable than I expected. She served as an asset to the band, particularly when she and Claudia harmonized on "All My Little Words." Simms' lead vocals on many of the songs from Distortion, lost to me on the album, were both memorable and special in this setting.

The Magnetic Fields is one of the few bands that really utilizes the live arena to present songs in a completely new form. It is not that the album arrangements could never be recreated in a live setting, but rather that Merritt understands that the mediums are different and deserve different treatments. I can say with certainty that seeing the band live is the quintessential Magnetic Fields experience.