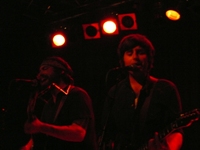 The Maldives convince me

The Maldives finally walk on stage, the music builds and pure feeling rolls over me; I swoon under the hazy burden of lap steel. The band is slow and tight, the singer looks out across the room and can see for miles, the room is riveted. The whole band sways and concentrates. In a refrain, all three guitars play C in a simultaneous-chord-gasm and the crystal ball hanging from the ceiling shatters. How could I not be convinced?

It was my great pleasure to see the Maldives play in all their alt-country glory at Neumo's last Friday. This show sent Ballard’s heartbreakin’ boyband into uncharted waters. They are getting to be pretty well known around town for delivering an intense performance to a packed house at the Tractor Tavern, but as doors opened to an empty hall at 8p, we were all wondering how well they could fill out the black walls of this rock club. I happen to be sitting at the merch booth for the night and I get a chance to talk with a friend of the band who tells me that the Maldives have a new cd coming out in January.

In case you are unfamiliar with the Maldives, they are a nine-piece band. Having nine members makes for a powerful stage presence. It also means that the band brings a lot of devoted friends. The first rows are conspicuously packed with dreamy-eyed ladies, hands outstretched, trying to grab onto the feeling in the air.

The next song is dedicated to Obama and the crowd howls—it’s an easy sell, sure, but I’m happy to buy it. Later, the band banters about losing a request to play at the Joe Biden rally against a high school marching band. They are clearly not used to being upstaged by a band with more members.

"The time is right now" and suddenly everyone believes it to be true. A man in the corner is drunk, alone and greatly moved by the music. He is rocking so hard that he breaks the gate that serves as a playpen housing the instruments next to the stage. The guy sitting next to me says, "Woah" and I totally agree.

I take a moment to look at the individuals onstage, I try to pick out their parts in the house mix: the violin is very subtle, the standing drummer plays an unmiked snare. I notice the banjo player: oh my God, his beard is HUGE. The beard then sends me a telepathic message, it says, "You have never felt such loneliness as I have felt." I try to respond that I have felt such loneliness but then the guy starts playing an accordion and the moment is so over.

Drunk guy’s friends wander over and hug him from both sides, my heart is thus warmed. I walk to the front row to take some pictures, the lights turn blue and "darkess falls." I suck at taking pictures. Everything is blurry and I can’t capture the feeling of the huge band on stage, which is now sending forth a tidal wave of heart-wrenching harmony.

When it comes time for me to be paid 20 dollars for sitting at the merch table, I can only think that having nine members means these guys never make much money from their shows. I take a cd and a black tee shirt instead of cash (I would have wasted it anyway) and promptly go home and listen to the self-titled album. In case you are wondering, the first song is great and it is called "simple decision". Don’t worry that the cd will be lacking in the intensity of their stage show, it’s a beautiful work of recording and it helps showcase the serene songwriting that can be hard to take in while they’re on stage.

The empty spaces of the venue are filled with sweet country feeling. It’s the end of the night and everyone sings. Sweaty, smiling, leaning in with brotherly love, everyone agrees to go back to Ballard and drink some whiskey.