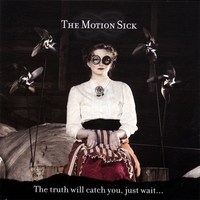 The truth will catch you, just wait…

Boston foursome The Motion Sick have a keen ability to combine a dark, sinister side with glowing pop to create a slick sound that's equally danceable and eerie. Songs tend to sway more to one side than the other, but on The truth will catch you, just wait…, a delicate and compelling balance is struck in just over 30 minutes.

Opener "Jean-Paul" has striking guitars that call to mind "The One I Love"-era R.E.M. The dark overtones of the song culminate in a dreamy, almost whispery bridge spoken by a female voice. The song is an excellent choice to start the album because its intrigue compels the listener to pay attention and listen on.

Next up, "30 Lives" is a penultimate pop love song, so good in fact that it made my Best of '07 list. It has everything a good pop song should: Hand claps, hooks, ba-ba-ba-bas, horns, and the best bridge ever: Playing off the song's title and chorus of "I long to spend another thirty lives with you," singer/guitarist Michael Epstein rattles out "Up, up, down, down, left, right, left, right, B, A, select, start," a cheeky reference to the video game cheat code that grants the player 30 lives. This catchy segment is repeated through the end of the song.

They continue with the light and poppy "Walk On Water," an apt follow-up that keeps the catchy vibe going. It demonstrates the band's lyrical wit: "I could walk on water like I'm one of the chosen / I could walk on water, as long as it's frozen," sings Epstein. Those familiar with the band's previous effort, Her Brilliant Fifteen, will find this familiar territory for the Motion Sick; their lyrics are eloquently straightforward and occasionally incorporate snappy wordplay. But this album takes a turn in an edgier direction, building upon the band's solid songwriting and delivering a more emotionally fulfilling collection.

From there, the album slowly returns to a darker, more somber mood. "Losing Altitude" is a perfect ballad, the sort that plays in the background during the break-up scene, full of emotional distress and beauty all at once. "The Owls Are Not What They Seem" (its title borrowing a line from Twin Peaks) comes in next, speeding up the tempo. It's another dark-ish piece, with a chorus of "I won't let you run / no one can help you escape" and so on over feedback-y guitars.

"Tiny Dog (Nobody Cries)" is another ballad, in which Epstein's vocals portray a certain desperation on lines like "Nobody listens, nobody cares / nobody stalks you or blogs your affairs." Next, "Some Lonely Day" begins with an intro that sounds like it could be a Killers song, and then grows more complex and dark, with stark guitars returning.

Closing with a cover of "Love Will Tear Us Apart" as track 8 and a dance remix of "30 Lives" as track 9, the album's end feels somewhat abrupt. The cover, a staple of the band's live set, is well executed — but as this particular song is one of the more oft-covered songs of all-time, it is familiar. Following that with the remix of the now also familiar "30 Lives" may leave one feeling slightly short-changed at the end. The remedy? Start again from the top and rediscover the band's exceptional ability to beautifully traverse both dark and bright sonic territories.