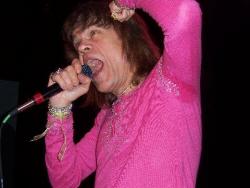 There is a great line in the movie Sunset Blvd where William Holden's character Joe Gillis says, “there's nothing tragic about being fifty. Not unless you're trying to be twenty-five.”

That quote was running through my head often as I was watching the New York Dolls' very enjoyable set at El Corazon last Sunday night. The Dolls, truly one of the great rock bands of all time, still rocked the same type of dive-y clubs they were used to playing over 30 years ago. The two remaining members, guitarist Sylvain Sylvain and lead singer David Johansen, seemed to have found a fountain of youth. While they are both in their late fifties, they continued to sound and play like they were defying the cruel gods of youth, but did it as gracefully as you could while playing in seedy punk clubs. Johansen looked especially aged, but he didn't try to force anything or give the impression that he thought he was younger than the 58 years he actually is. He looked exactly like Mick Jagger and bounced around the stage like him too.

When bands reunite there are always a host of reasons for it: missing the crowds or because your audience has now grown up and has well-paying jobs in finance or real estate and you can finally cash-in on their nostalgia. This tour would only be embarrassing if they were playing in casinos. The New York Dolls reunited a few years ago because Morrissey asked them to.

When they played at El Corazon the crowd was full of people from several generations, with almost everyone dressed in black. It was a very rock and roll crowd expecting to be rocked – and they were.

For over an hour and a half, Johansen, Sylvain and three other guys blew right through the Dolls catalog. Many songs on the setlist came from it's few albums from the 1970s, but there were also several from the band's 2006 better than-you'd-think it-was comeback album One Day it will Please us to Remember Even This. They also through in a cover of Big Brother and the Holding Company's “Piece of My Heart”. The older songs have held up considerably well over time – still being played loud and sounding fresh. The jury is still out on the newer songs, but there were a few, like “Rainbow Store” and “Fishnets and Cigarettes” that sounded as good live as some of the older ones.

The new members of the band were competent and professional (I'm not sure why I've already used “gracefully” and “professional” in a review about the New York Dolls but there ya go), but they generally stood back and let Sylvain and Johansen share most of the limelight. Bassist Sami Yaffa never really tried to replicate Arthur “Killer” Kane's basslines, and that was the most obvious difference from hearing the band on record and the reformed version playing this night. Other than that, though, the band sounded as good – if not better – than could be expected.

Aside from the unfortunate cover of “Piece of My Heart” – Johansen couldn't successfully replicate Janis Joplin's vocals while the band played the song faithfully – and a tender moment where Johansen and Sylvain sang a power ballad by original guitarist Johnny Thunders (“You Can't Put Your Arms Around a Memory”), they were pretty rockin' from beginning to end. For the older classics like “Babylon”, “Trash” and “Personality Crisis” the crowd knew every song and sang along with Johansen. In fact, only when they bordered on sentimentality did it seem to misfire.

I know I was guilty of it, but it is easy to forget just how influential this band was and is. It's obvious to now see the influence of the Dolls in the sound of bands like Motley Crue or the Ramones. They've yet to be inducted into the Rock and Roll Hall of Fame, but they don't need the hollow accolade anyway. It would be nice to see such a great and important band getting the attention it has earned. Jann Wenner and the other industry hacks might not get it, but the few hundred people who crammed into El Corazon got it, though.

That is immaterial, though. The New York Dolls came to El Corazon on Sunday night without anything to prove. They showed up to do the one thing they were and are truly great at: rock a club full of adoring fans.

1.Babylon
2.Puss 'n Boots
3.We're All in Love
4.Piece of My Heart
5.Plenty of Music
6.Private World
7.Human Being
8.Dancing on the Lip of a Volcano
9.Punishing World
10.Looking for a Kiss
11.Rainbow Store
12.Pills
13.You Can't Put Your Arms Around a Memory
14.Fishnets and Cigarettes
15.Dance like a Monkey
16.Trash
17.Jet Boy
1.Personality Crisis
2.Gotta Get Away from Tommy