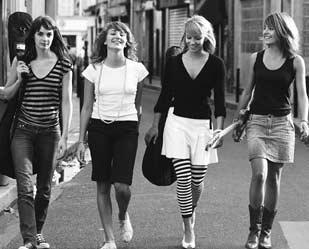 The Nylon Tour, starring The Plasticines, kicks off tonight at El Corazon Last year, I was very excited to see the first Nylon Tour when it hit Seattle because it featured two bands I liked (She Wants Revenge, Switches), one I was indifferent (The Virgins) to and one I loved (Be Your Own Pet). This year, there's also a strong lineup with Patrick Wolf, Jaguar Love and Living Things, but I am most excited to catch one band: The Plasticines.

The Plasticines are an all-girl band from Paris in the tradition of The Donnas or a slightly more rockin' Go-Gos. They have a sound that features power-chord driven guitars and upbeat, catchy lyrics. The band has a forthcoming album this summer called About Love but I became hooked on this band when I took a chance (albeit not a big one) on their first album, LP1, when I bought it at Sonic Boom a few years ago because it had a sticker on it that featured a quote comparing the band to The Donnas and Avril Lavigne (which I admit is probably a bigger deal to me than it is to the average TIG reader). The Plasticines were the first band signed to Nylon Records.

I'm not sure how much of the other bands I'll catch tonight but I've wanted to catch The Plasticines for quite a while, so I had to juggle a few things around in my schedule, but I'm not going to miss it.

Here is the video to their single "Barcelona":