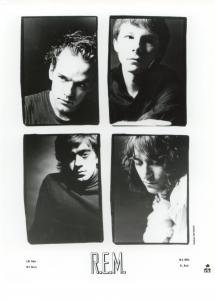 Today, when I hit shuffle after running into my office relatively late because I was trying to mail things to colleagues and trying to book flights for the holiday, I got "The One I Love" by R.E.M., specifically the unplugged version that was a b-side on a 12" single of some flavor I remember from when I was a DJ in college. I personally think it is a better version of the song that the original — Michael, Peter, Mike, and Bill turn this into a tender beauty with Michael sounding as passionate as you will ever hear him.

I suppose R.E.M. was at its peak during this period… and they were one of the high points of MTV's Unplugged (which this is not from), so it makes sense that R.E.M. could fashion such a thing of beauty from simple roots. I've always wondered why MTV doesn't release all the "lost" Unpluggeds, like R.E.M., the Cure, Chris Isaak, maybe LL Cool J. Someday, I suppose, but until then, this stripped down version of "The One I Love" is a glorious revelation from a band in its prime.