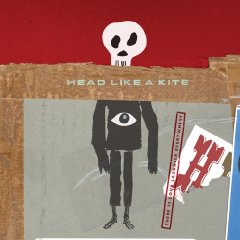 There Is Loud Laughter Everywhere

The sophomore release from Head Like A Kite sounds like a mix-tape of rare, alternate twelve inch versions of radio smashes from a DJ who has collected a library of great music you somehow never heard before. As HLAK frontman Dave Einmo himself claims, "I wanted to create a record that sounded like big beat remixes of songs that didn't yet exist."

When I reviewed the band's debut a couple of years ago {review} much was made of the "soundtrack" quality of what the band does: Live, Dave bashes on the guitar with perfectly good rock song chords but tweaks them and torques noises from gimmick boxes and keyboard mutants as drummer Trent Moorman drives the beat entirely on the one but with plenty of space for the weird, otherworldly lyrical imagery and Einmo's controlled trip-hop jams. Local artists such as Graig Markel and Zera Marvel join the duo in constructing a soul base to a carnivalesque lexicon of words and sound.

On There Is Loud Laughter Everywhere, thirteen songs and fragments seem like a loop for a David Lynch space opera, perfectly produced by Brian Deck (Secret Machines, Modest Mouse) and mastered by one of the best mastering labs in the business, Dave Cooley's. The rumored ranks of guests include Nabil Ayers from The Long Winters, as well as Asya from Smoosh (again, thankfully; she was wonderful on first album Random Portraits of the Home Movie too), members of Crooked Fingers, Radio 4, and other autonomous Pac NW pop-form experimenters.

This would all be DJ Shadow-inspired textual and textural theory if the humor wasn't so sharp; and the weird worlds Einmo creates would be mere farce if Einmo and Moorman didn't painstakingly create music with an innate sense of Other; that these songs exist somewhere else in a more regulated form. It's sort of like Eno and Byrne's My Life In The Bush Of Ghosts in reverse, or the bottle falling out of the sky on to the head of a tribesman in the 80s cult movie "The Gods Must Be Crazy." The spirits being invoked in tracks like "We Were So Entangled" and "Big FM Radio Hit" (which sounds like the Clash slamming into early Commodores) begin here, but take you to a party filled with people you only half-know. That's what is called an adventure, if you're brave enough to dance.