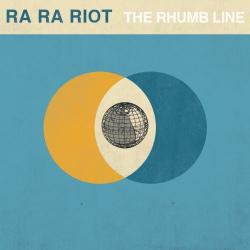 Ra Ra Riot is quirky, orchestral indie rock best suited for fans of Vampire Weekend and the Arcade Fire. Unfortunately many of the songs on The Rhumb Line are like those movies that are really only 2 hours long, but feel like they've been dragging on forever. There is too much repetition and not enough change to prevent your mind from wandering, and the song soon becomes backgrounded.

While it's great to stumble across an indie band that isn't afraid to go beyond 2 guitars, bass, drums, and maybe a synthesizer every once in awhile, the inclusion of frantic strings throughout the whole album makes the music seem more dramatic than it should be or actually is.

That's not to say that cellist Alexandra Lawn and violinist Rebecca Zeller are not extremely competent players — they are. And the places where the strings fit in the best are when they're used for adding layers of texture – first in "Winter '05," one of the 2 biggest testaments to all of the Vampire Weekend comparisons (the other being "St. Peter's Day Festival"), and later in "Can You Tell," (possibly the best track) a plaintive and eager song that details the harrowing, age-old "do you like me back?" dilemma.

Frontman Wes Miles sings with a strangely affected British accent and most of the time it's difficult to understand what he's saying. A big burst of energy meets a sizeable dose of melancholy throughout, which means these guys are probably a great live band but the songs seem to all end up in relatively the same place and follow the same structure.

To the band's credit, after listening to the album a dozen or more times I started waking up with songs or portions of songs stuck in my head all morning — most notably "Each Year" and closer, "Run My Mouth." Ra Ra Riot is the answer if you're looking for something different and are tired of hearing about Vampire Weekend every time you turn the corner (although I have referenced them 3 times in this review; it's inescapable). It's easy to listen to The Rhumb Line and neither love it nor hate it, no matter how many times you listen. The music could benefit from a little more of a push if this band is going to stick around.