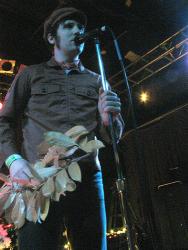 The Shackeltons rock pants off at Neumo's

The Shackeltons rocked the crowd Thursday night, and the rest of the lineup at Neumo's featured local Seattle bands you should know more about too.

Openers Born Anchors played with enthusiastic hearts. The lead singer liked to wail more than a bit, and the drummer played with a maniacally-happy smile, as my plus one for the night pointed it out with a smile on his own face. The vocals tended to blur together and sound alike, but the band exceled at instrumentation with tight blends and a fast pace.

New Faces are a trio of youngsters from Port Townsend who won the 2008 EMP Sound Off competition. They play catchy-as-hell, simple Britpop beats (think a local flavor of Franz Ferdinand), with Brit-kid haircuts to match. It's the kind of music that can get pleasantly stuck in your head, the kind that drives you to make converts of your friends so you have people you can gush with. While I was bopping along to their short set, I wish I could've heard their lyrics–but Neumo's sound quality is what it is and now I've got an excuse to snag their new EP.

It was a lovely set.

The first thing I noticed about the Hands was their interpretive guitar sex (aka the friendly antler-locking between the bass and guitar). The second thing I noticed was the best tambourine playah evah. The third thing was their solid commitment to rock your socks. Every time they screamed "I don't wanna die," my call and response instinct kicked in and I'd yell "neither do I!" The band's intense interactivity made their set a joy to watch. As much as Born Anchors impressed me with their playing, THIS was the band to study for instrumentation. I recommend them to the serious Rock Band players who enjoy playing intricate fingerings more than head-nods toward familiar songs.

When the Shackeltons took the stage, lead singer Mark Redding launched into a pre-play speech exactly as deadpan and random as King Missile's "Detachable Penis." He then started waving white blossoms and tree branches in the air, explaining that they were taken from a landscaping truck that had cut down a tree earlier that day. The branches were waved like incense then flung everywhere. This was a prelude to the only thing you need to know about Redding: he is super insane, maybe in a good way, maybe not. Dilated eyes and speeches about "Nyquil" that appears to be whiskey but "don't tell [his] mom" were followed by even greater show-stealing antics: he fell backwards, straight and hard, to sing while laid out flat on his back on-stage, "I want to fall in into love." Songs were mainly spoken or screamed.

Later, when he dropped the mike and left it lying on the stage, guitarist Erik Fisak gently/reproachfully put it back on the stand. You could tell the whole band is used to his antics. Mark Redding flies too high; if there's one thing I was sad about during this set, it was that there's a good chance The Shackeltons' singer will flail into rehab before they finally take off. Despite that, Redding held it together during the songs (for the most part) and pulled off what I've expected since I first heard the band's debut album: a punk-pop set that was one of the best I've heard in a long, long time.

The Shackelton's sole encore was the first song they ever wrote, a fast-paced little punk rock ditty called "Jenny" that wasn't half-bad. Afterwards, Redding encouraged everyone to "go to sleep."