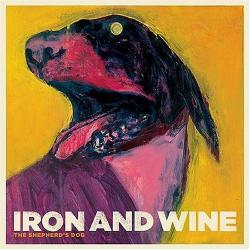 Without a doubt, The Shepherd’s Dog is the most accessible album ever recorded by Iron & Wine. The arrangements for the songs are suddenly lush and full, the beautiful melodies are still there and heck, things get downright dancy at times, but Sam Beam has taken Iron & Wine into new territory. Maybe it was all the time spent with Calexico for the In the Reins album and tour, but whatever it was, Iron & Wine should keep on doing it, as The Shepherd’s Dog is one of the fascinating albums of the year.

Iron & Wine has made a name for it(him?)self by recording some of the most beautiful and introspective songs of the decade. The agonized beauty of Our Endless Numbered Days and The Creek Drank the Cradle made them both critical and popular (well, as popular as modern rock gets) favorites. So, the turn taken by Iron & Wine on The Shepherd’s Dog is even more remarkable, extending the sound of the band from restrained and subdued homage to the likes of Palace to a much more elaborate creature. Whatever the change actually is, it works remarkably well for Iron & Wine, like Dorothy showing up in vivid color in Oz. “Pagan Angel and the Borrowed Car” is a downright foot-stomper compared to the usual fare served up by Beam, with pianos, violins, guitars, maybe a xylophone (maybe not) and whatever else was lying around the studio. You can’t help but be impressed with the deep of melodies and harmonies that Beam puts together on “Pagan Angel…”

While that song is an upbeat number, “White Tooth Man” has a darker tone, but is still a robust arrangement, kind of like Neil Young Jr. in many aspects. Even some of the ballads are more full-bodied, like “Lovesong of the Buzzard,” which has a rich organ that drifts in the background as guitars and accordions take the lead. It's something akin of modern rock zydeco on morphine, if that makes any sense. “The Boy with a Coin” is darkly beautiful, with a playful rhythm combined with melancholic melodies, an excellent example of where Iron & Wine excel on The Shepherd’s Dog. And if you’re not convinced of the change, just listen to “The Devil Never Sleeps” and you’ll realize that Beam actually wants us to get out of our seats and move to his music (well, move more than reaching for that bottle of whiskey).

There are still some more typical Iron & Wine tracks, like the barebone “Carousel” and “Resurrection Fern,” which are gorgeous ballads, especially the latter, ripe with Beam’s vocal harmonies. “Innocent Bones” also pulls the throttle back (if you can believe anyone who writes that about Iron & Wine), with country ballad foundation below an Iron & Wine frame. “Peace Beneath the City” takes on a Tom Waits like persona with its dark, smoke-filled sound. Beam does go astray a little at times, like the oddly 70’s country rock sounding “Wolves (Song of the Shepherd’s Dog)” that borders on self-indulgent. The album closes on “Flightless Bird, American Mouth,” another rich arrangement that is propelled by intertwined piano and guitar.

The Shepherd’s Dog is the kind of album that can thrust Iron & Wine from the bedrooms of dejected lovers to the living room of the masses. Sure, it might not be likely to make Iron & Wine a household name, but the trade that Sam Beam made between the despondent sounds of his early albums and the fully realized textures of The Shepherd’s Dog is one that both he and his listeners win. The album is a cornucopia of majestic songs that begs for repeated listens.