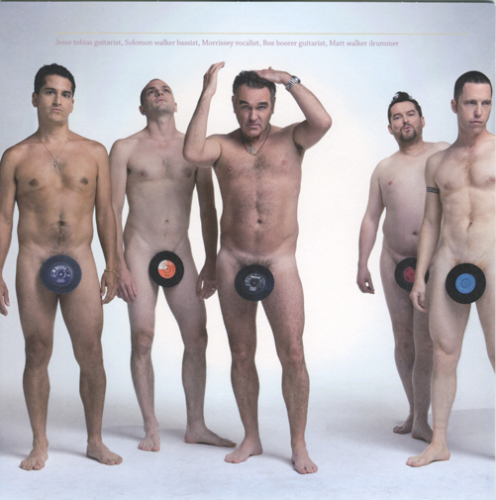 Antony And The Johnsons

The State of Music Today for February 2009 So, what will he be called? Normally, when one gets knighted, you go by your first name, but wouldn't that seem odd?

It would only be proper for him to be dubbed as only he could be:

Yes, indeed, I am advocating that the patron saint of modern rock be knighted by the same woman that he and his bandmates once declared dead.

Is there any other citizen of Great Britain that has been more culturally influential and significant over the last quarter century than Morrissey? No*. No one has had the same lasting legacy while still staging comeback after comeback (does that, then, count as "coming back"?) than the king of mope.

The real question here isn't the worthiness of Moz to be knight but rather would be ever lower himself to be knighted by the aristocracy of the United Kingdom? He's not exactly a firebrand of conservatism (yet the #1 party member for the Tories is an unapologetic Morrissey/Smiths fan), and really is downright lefty, but knighthood for Moz might be too hard for someone who both loves and hates himself as much as Stephen. Get the word out.

What prompts all this? Well, Morrissey just released his third album in his 21st century return to fame, a new disc called Years of Refusal and it is great. Just great. Ringleader of the Tormentors, his previous work, was good but lacked the same teeth of You are the Quarry. Now, he's found that middle ground for which we've all longed: tortured chanteuse like Vauxhall and I mixed with rebel a la Your Arsenal. He might have even have recorded his best solo song ever (in the form of "I'm OK by Myself"). All I can say is that Morrissey never ceases to amaze (see above)

* OK, well, the only other people close would be, in this order, Doctor Who, the members of Monty Python, Gary Oldman, Ben Kingsley and maybe Thom Yorke. And yes, in my world, imaginary people can be knighted.

1. The Rakes: Ten New Messages (honestly, I don't think this ever got released in the US. A shame indeed).

2. Faunts: Feel.Love.Thinking.Of. (Did you realize the Postal Service came out 6 years ago? Now you can pretend they recorded a follow-up).

3. Franz Ferdinand: Tonight (It is good. That is all)

4. Beirut: March of the Zapotec & Realpeople – Holland (Sort of like a 21st century, atheist version of The Two Sides of Sam Cooke.)

6. Pete & the Pirates: Jennifer/Blood Gets Thin (OK, I lied, but its just a single – UK only, sorry)

My boss here in the Land of Wind and Ghosts is fascinated with level of internal contradictions in which people can live. I mean, there are an awful lot of people out there who voted for both George W. Bush and Barack Obama – now, honestly, how do you really come to terms with that apparent inconsistency in your head? I find myself in the same place right now when I glance at my iPod Top 10 and see that the numbers 1 and 2 (in no particular order)

"Shake That Devil" by Antony and the Johnsons

"I'm on a Boat" by the Lonely Island

With the former, we have a song where Antony starts off singing a capella with deep passion and pain, slowly merging into Tom Waitsian jazz slasher – and all along telling the story of animals doing ungodly things. The latter is about being on a boat. How I can remain true to myself and still bounce back and forth from these songs is truly beyond me.

That being said, they both have their appeal. Well, to me. Sure, the Lonely Planet is just Weird Al for a dirty, internet age – maybe Al after the Fall – but talk about being a perfect genre parody. Absolutely spot on, right down to the T-Pain guest vocals. And if you haven't sat down and watched the video, do so now (linked above). I'll wait. And sure, Andy Samberg, although showing a lot of promise, especially after sampling Aphex Twin earlier, still lacks his own acting chops – watch "Hot Rod" and you too can see Andy Samberg as Will Ferrell as Hot Rod in "Hot Rod"!

On the other side of the planet, The Crying Light and Another World by Antony and the Johnsons are brilliant, but I find it hard to be able to recommend Antony to anyone sight unseen. I mean, its like finding out someone liked "Transformers" and because they like movies, you suggest they might like "Eraserhead".

Really, the ven diagram of Michael Bay and David Lynch doesn't have too much of an intersection, just like SNL actors recording albums and crossdressing indie torch singers. All that being said, Antony just exists on a plain beyond our mere mortals comprehension, so if you're feeling transcendental, pick up the The Crying Light and once you get past the vampyric album cover, sit back, relax and feel the pain.

Five things to look forward to in the next month:

1. Baseball (Sorry, its just that way)