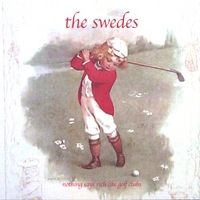 Another chapter of my glam binge: The Swedes

the sleepwalker July 7, 2008 no Comments

I've been riding a glam wave lately and The Swedes have hopped on with their song "Julie Walker" (MP3).

The comparisons to similarly Sweet are inevitable, but it reminds us that '70s rock wasn't all disco or Foreigner. I also have to admit that I was particularly drawn in by their latest album's title: Nothing Says Rich Like Golf Clubs.

1. What are your favorite mispronunciations, misspellings, and/or misappropriations of The Swedes?

The Swodes. I don't remember who said it or why it was particularly funny even, but it's had staying power.

2b. Roxette, Jens Lenkman, and Robyn vs. I'm From Barcelona (but IFB can only attack in groups of 5 at a time with tag outs) in a cage match, who wins?

Jens – he'd entrance everyone with his sharp and self-effacing humor and then he'd gouge their eyeballs.

3. Have you ever played golf? If so, did you wear a golf cap?

Yup, I play golf a couple of times a year with my dad and brother. They're suburban types and good golfers. I just try to demolish the ball & I, therefore, suck ass. No golf cap, though.

4. What current band would you most like to go on tour with?

The New Pornographers. They have fantastically rocking, poppy arrangements and we aspire to that. I last saw them at Webster Hall in NYC and they were terrific in spite of the fact that that place usually sounds like ass.

5. What current band would you least like to go on tour with?

The Jonas Brothers. We'd get arrested for contributing to their delinquency. We'd send hookers and coke dealers to their rooms every night. They'd be knee-deep in coke and hookers and we'd get blamed.

6. If you were the animal of your choice, what animal would you like to have riding on your back in a memetastic Internet photograph?

If I were the animal of my choice (dolphin) I'd like to have one of those bizarre human dolphin lovers/lusters on my back (for obvious reasons). Remember the news buzz about that a year or two ago? ewwwwwww…

7. If The Swedes were wrestlers, what song would play as you ran out to the ring?

Crazy Horses by the Osmonds. Think I'm being funny? You think the Osmonds are 100 percent wuss? Listen to that shit and tell me you wouldn't be intimidated.

8. If The Swedes were competitive chess players, what song would be used to intimidate your Russian opponents?

Well, shit. Once again, Crazy Horses would be pretty disruptive and intimidating to a chess opponent.

9. If The Swedes were an elite strike force, what kind of missions would you undertake?

10. Though already debunked, what urban legend do you most want to believe in?

That Mikey from the Life cereal commercials ate too many pop rocks one day and exploded.