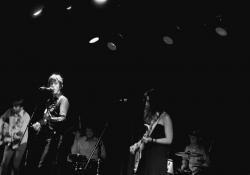 The Wooden Birds in Brooklyn

I came to the party late on American Analog Set. A couple years ago I was invited to an event deep in Brooklyn for a publicity company celebrating their tenth year in business. Broken Social Scene played for a small crowd of jaded music writers. Andrew Kenny was there; his fiancée (wife?) was one of the publicists at the agency. I didn’t really know him outside of being “the guy who covered “Line of Best Fit” on a split EP with Ben Gibbard.

Kenny got onstage with BSS for a little bit; as I recall they played a couple AmAnSet songs, and soon I discovered two things: that I liked them, and that I was too late. The band had more or less disbanded not long before. It was just one of those missed opportunities, like how I never saw Elliott Smith play live—I always figured I’d get around to it one day.

Now that I’ve become a full-fledged American Analog Set fan since, Kenny is back with The Wooden Birds and Magnolia, one of the most pleasant surprises of the year thus far. Despite the new name, this group might be best described as a re-patented American Analog Set. But as the name implies, they’re more “wooden.” (read: Neil-Youngishly authentic, with more acoustic guitar, more egg shaker, more in-hand percussion).

Last week I headed back to Brooklyn and the relatively-new venue, The Bell House, to see the Wooden Birds in action and fulfill something of my American Analog Set longing. A five-piece assembled in Austin, Kenny takes on the lead vocals and bass, with (if the press release didn’t assure me otherwise) I would have guessed Iron and Wine’s backing band filling in the other four nests.

Tall and lanky in a way matching his Fender bass, Kenny opened up the show with the ooh-oh-oh-oh-ooh’s of single “Sugar” before being joined in by the rest of the group. It was a muggy summer night, but in the wood-walled Bell House, the warmth of the group’s sound was like a much-wanted blanket, and that general sense was sustained throughout the hour or so the Birds played for the half-full club.

While there were moments of pseudo-rocking out at the show (my plus-one later described it as “water-aerobics rocking out,”) Magnolia doesn’t vary tempo or instrumentation enough to have stand-out tracks. Almost every song has a successful male-female-male harmony leading into the bridge or chorus. If any stood out, it was “Choke,” one of the quieter tracks on the record, when the voices carry the weight of the song, as opposed to the bass or thickly-strummed guitar.

Running out of material about 40 minutes into the set, Kenny joked that they prepared a couple covers just in case. What followed were two of my favorite AmAnSet tracks, “Aaron and Maria” and “Kindness of Strangers” from the Know By Heart record. It’s a testament to the Wooden Birds that, for a room full of AmAnSet fans, these two tracks weren’t the most well-received of the night. Singing the great refrain “No one gives a fuck about us” on “Aaron and Maria,” I couldn’t help but feel happy for Kenny. Wooden Birds weren’t an AmAnSet side project—they were its natural evolution.

With the dirth of “best” new music coming out that’s supposed to challenge our concepts of harmony and dissonance (read: celebrate the cerebral) Magnolia opts for something very, very welcome: prettiness (read: celebration of the emotional). And while Animal Collective, Dirty Projectors, and Grizzly Bear have their moments of pretty, they seem calculated as precisely that: orchestrated, precise prettiness. Wooden Birds, like their namesake, fulfill a simple purpose—to be pretty in all, to ease, to be an art that does not challenge, but rather comforts from the ledge of your grandmother’s dresser. Which is the nobler cause?

Back home, late in unhip Manhattan, I blew dust off the cover of Air’s Moon Safari and threw it on the turntable as a replacement for the morning’s Deerhoof. I couldn’t help but wonder: Could pretty be the new punk? Or is pretty, like Animal Collective, just something that needs the right context?