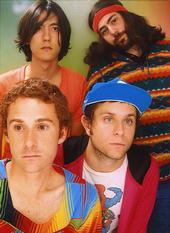 This is good for your HEALTH

Faces down into keyboards placed on the floor. More pedals combined than contained in your specialty guitar shop. Stop and start orchestration which would put I-5 during rush hour to shame. Sparse floating vocals slashed up with sudden bursts of screams.

This was HEALTH. This was the sort of show where you step back and say, "What the hell am I listening to and witnessing?" (Case in point: Listen to "Zoothorns" from latest s/t.) From the edge of the stage at Chop Suey I was at the feet of the guitarist, no, nearly falling over onto the feet of the guitarist, an enthusiastic fan shoving me from behind, bewildered or shocked individuals on my other side, and me in the middle, actually and figuratively.

My interest drew to tall, lanky, hair-in-face John Famiglietti, who seemingly had no purpose but to kneel before an altar of pedals, pushing buttons and twisting knobs at perfect moments, creating the HEALTH sound you really cannot find much elsewhere. He then picked up a bass I did not register as one at first, due to the way he was shredding it like a lead guitarist. The end of "Tabloid Sores" came, and he stood statue-esquely in the front of the stage, strumming the outro's pulse while the other members of the band caught their breath. Suddenly he was screaming into the mic like a little girl.

For a blur of a half hour, maybe shorter, HEALTH assaulted us, though I say that in admiring use. I watched two young teen girls who couldn't take it any longer and left. But for the rest of us it was pretty rapturous. They know precisely when to cut-out and then hit us upside the head, without noticeably paying attention to each other. I wish their set were longer, but by the looks of drummer BJ Miller, whom igShrie described wonderfully as, "Rock 'n' roll all over the place", the physical undertaking to play such music is a grueling workout.

Comparisons are inevitable when one band breaks and half the members form another. Yet, Past Lives, the new group for Blood Brothers' members Jordan Blilie, Mark Gajadhar, and Morgan Henderson, is trying to work from the ground up. Starting out small at house shows and opening slots, they do not even have tunes to check out online as of yet. Which is part of the reason I will admit to not dancing when the played–I wanted to feel this new band out, decide what the direction is.

I really enjoyed hearing Jordan sing and work the stage alone. While taking all the better elements of their previous band into consideration, this is definitely a more approachable, less in-your-face sound than the Blood Brothers had.

Evaluating my own thoughts on the fresh band, I couldn't fully read the rest of the crowd. Obvious fans of their older works were there expecting the same as before, thrashing mindlessly no matter the beat. The young girls were won over by Jordan as always, two who had to be barely 15 (were they the same ones who later left during HEALTH?) yelling, "How old you are?!" His snarky response: "I'm 12–I've just learned how to dry hump!" Youngin's aside, the rest of the audience seemed on the same page as me, checking the band out, heads lightly bobbing trying to figure the tempo changes and chorus hooks. David Bazan was spotted in the crowd. It was, however, a rather small show, barely half of the Chop Suey dance-floor filled.

Past Lives will be playing later this month, coincidentally on my birthday, in a much smaller setting at underground art-space Healthy Times Fun Club. I'll be interested to see their set in a more intimate setting, as it felt that that was what they needed on this Thursday night.