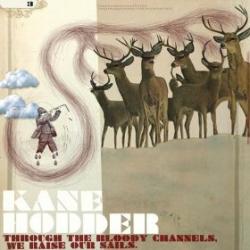 Through The Bloody Channels, We Raise Our Sails

Kane Hodder are one of those bands I've known about for a long time, but never experienced. That's a terrible thing to admit, because they have been a Seattle mainstay for awhile. Founded many years ago and signed to iconic punk label Fueled By Ramen, losing two members over the years as they toured with and opened for These Arms Are Snakes, Boy Sets Fire, Stretch Arm Strong, Schoolyard Heroes, and other post-hardcore bands, I imagine many have relegated them the pile of regional bands many will always adore but never think to spring back into action.

That's why discovering their very strong Internet EP Through The Bloody Channels, We Raise Our Sails is so exciting. Opening with "Gold Fever! Catch It!" the band is unafraid to be politically humorous and melodically contagious as hell all at the same time. The serpentine guitar of the track leads one into hard rock bliss, as incredibly versatile vocalist Andrew Moore sets his standard here by going from falsettos to growls and back to straight ahead singing within seconds.

All of these guys play great. Eric Christianson leads the band with a variety of guitar styles (he ain't no punk power chord hack, but doesn't lose himself in leads either, keeping it riff-textural and rhythmically effective) and Aaron Yost takes some fancy bass chances while holding down the deep notes. Charley Potter thrashes it along on drums quite well, and second guitarist Jerome Sauer never lets you get bored either.

My favorite song is probably the third in the sequence, "The Dermatologist Has Been Eaten; Cursed By His own Hubris" (no doubt the first infectious anthem about infection that uses a semi-colon and the word "hubris" in the title; these are my boys!) which is an all out bloody rock opera in just 3:31 minutes. Moore rants straight into the next track ("Siberia 1908") and you can't help but follow his vibrato. The fifth and final song here features some finger-licking Talking Heads style funk-rock bass picking, before spazzing completely out and then you realize at the end that this band has listened to a little 80s metal in the tour van. Maybe more than a little, and maybe that isn't such a bad thing.

Look, with these song titles, I know what you're thinking: another Blood Brothers kind of avant-emo band screeching and trying to recontextualize US Maple for the tender ones. But no, this is actually tough rock and roll with a lot of flex made by some really talented guys who sound like they love stacking weird pieces of their favorites parts of the rock machine into their own garage-bound Frankenstein. I am ashamed and regretful I never saw Kane Hodder back in the day, but I am pig-in-shit happy that I may be able to catch them now.