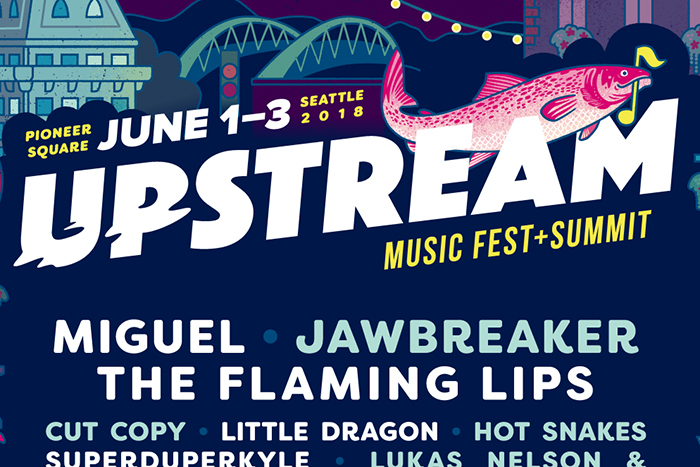 Somehow this thing is happening again! Not to say last year’s wasn’t fun, but just a bit… financially floppy? Logistically loopy? Understandable for an ambitious inaugural event with over 200 acts, though. I’m curious to see what does and doesn’t work this time ‘round. But most importantly, the lineup is brimming with some of the the most creative minds from the PNW (and beyond), so let’s go!

This Seattle- based singer is a sapphire of a person. On both the stage and via Facebook live videos, I’ve seen her drop shivers on listeners, encourage people to be their best selves, and laugh like only someone living out their passion can. As she croons in the below video—she’s got that fire.

OK, so this past weekend I was photographing Sasquatch! and took a break in the media lounge’s restroom. While in the stall, a woman washing her hands at the sink started singing. Even after hours of listening to live music, hearing some of my favorite songs echo out across the Gorge—this ultra-rivery voice snapped my eyes wide open. When I emerged, we started chatting, and I discovered it was R&B/pop artist Parisalexa! After that sneak preview of her vocals, I’m excited to experience this singer-songwriter-producer’s full set.

Don’t let your Friday night end without dancing. No doubt this LA hip-hop quartet will bring the energy to Trinity. Tongue-in-cheek lyrics, sky-high antics, effortless flow. Into it.

You already know the power and panache of Prom Queen, right? Now imagine her teaming up with some of the city’s top choreographers, soundtrack creators, and set designers to recreate the tale of Mata Hari, a WWI double agent. Mystery, murder, seduction, and slinky dancing: Would you expect anything less from a Can Can presentation?

In 2017, Jesy Fortino graced Seattle with her first major solo release since the aughts. If the weather forecast for this weekend is correct and there’s rain, I recommend catching this performance even more. Haunting synth, ambient columns of sound, a pitter-patter of lyrics coming and going as she pleases. It sounds as if she’s recording her thoughts into a journal juuuust loud enough for you to hear.

Pak as a solo act! After performing as Kore Ionz’s frontperson for years, the multi-instrumentalist started a new chapter this year. On top of all his talents, the reggae maestro is also the co-founder of Totem Star, an organization giving kids access to musical opportunities. Definitely want to support this artist in every iteration.

Freaks only! That’s the protocol for Red Ribbon’s recent demo of the same name, a lo-fi, high-fire sampling of discontent. Mastermind Emma Danner continues to crawl through listeners’ brain-pipes, whispering warnings and reverberating veiled threats. Come get moody with me at this.

Neo-soul that hints of voodoo. Hip-hop that’d mix perfectly with petrichor. I’m all about her tense vocals, confidence in her naked form, and refusal to identify as working within only one genre. I’m betting the New Orleans native will offer a transcendent experience, to those willing to accept.