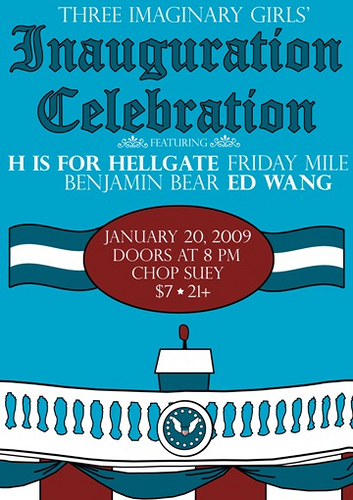 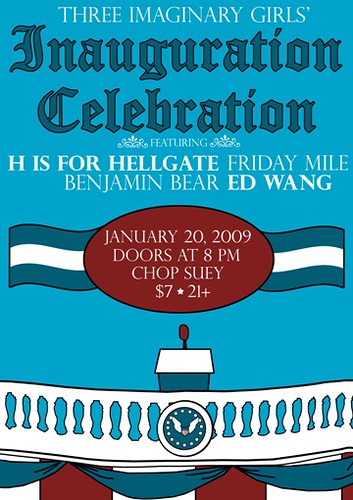 TIG's Inauguration Celebration is, my dear God, tomorrow night. I can not possibly be more excited about the kick-ass levels of rock and roll being played Tuesday night with H is for Hellgate, Friday Mile, Benjamin Bear and Ed Wang. I'm excited about the dawn of the Obama Presidency, about this excellent poster by my friend Imaginary Kiku and all of this rock Tuesday night.

I'm going to write about one band each day until the big event (which I booked to coincide with my upcoming thirtieth birthday).

H is for Hellgate is a band that has gotten better and better each time I hear them. Their live shows rock more and more each time (their CD release show at the High Dive last month was one of my favorite shows over the past few months) and their latest album, Come for the Peaks, Stay for the Valleys, was the thirty-sixth best Northwest record (according to our readers) and I suspect it would have been higher if it was released earlier in the year – giving listeners more time to grasp its intricacies. The lyrics from singer/guitarist Jamie Hellgate and the guitar-based melodies reveal a band that that will be a major force in the Northwest for years to come.

Here's a video of members of the band covering my very favorite rock band, Sleater-Kinney: