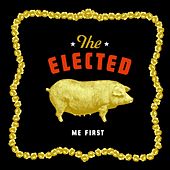 "A Time For Emily" by The Elected

And a good morning to you all. Erik's going to be otherwise occupied today, tomorrow, and Friday, so he's asked me to step in. (No, I didn't lock him up with a Chicago Style Manual. He really is just busy with matters of laboratory science and whatnot.)

Today's spin landed on one of my favorite bands, The Elected. They're down the branch from my most favorite band, Rilo Kiley, on the band tree — RK's guitarist/co-lead singer-songwriter/co-former child star Blake Sennett leads The Elected, with drums by Jason Boesel and, on their second album and on the road, slide guitars and other things by unofficial fifth RK member Mike Bloom. Yeah yeah yeah, I know these bands. Thing is, it takes more than being a member of Rilo Kiley to impress me. Fact: Jenny Lewis's album with the Watson Twins was only so-so in my book. And considering the lifelong girl crush I've had on Jenny, ever since "Troop Beverly Hills," that's pretty hard for me to admit. Also considering Blake's reputation for being a bit of a, um, turd, I'm always surprised at how perfect his songs are.

Oft-overshadowed by the superfoxy Lewis on RK stuff, with The Elected he's front-and-center, wearing his heart on his sleeve and providing the back story on perhaps how he came to be such a, um, turd, or maybe just why he has the reputation. Don't people often mistake complicated, artistic types as assholes because of their tendencies towards solitude and general malaise? He certainly doesn't hold back his bitterness, but I believe he has gotten rid of the silly moustache he sported around the time of the release of their second album, Sun Sun Sun.

"A Time For Emily" is a brief song from Me First that employs canned beats, trumpets, vocal harmonies, lyrics from another song on the same album ("Don't Blow It"), and the extremely sing-alongable line, "Congratulations! You just fucking disappeared." Blake's lyrical strength is straightforwardness, and I love him for it, turd or not.