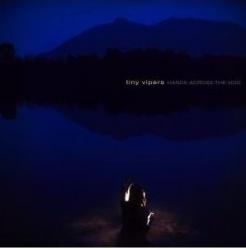 Hands Across the Void

Tiny Vipers' Hands Across the Void demonstrates her–the band is actually the project of Jesy Fortino–full power of her talent. While her guitar pieces may be along the lines of what you'd hear when friends quietly fiddle around late at night-extremely minimalist, single string picking–it's her vocals that draw you in–strong and commanding, with determined raw emotion, her voice is haunting.

On opener "Campfire Resemblance," her voice rings out with a deep maturity. A very appropriate song title, as the album has a feeling of being out away from the city, somewhere in the woods on a rainy night, possibly around a campfire. Perhaps that image is a bit contrived, suggested by the album pictures of Fortino somewhere out in the woods with a lantern and by a lake. Nevertheless, it's a very complete and relevant package, continuing on the feeling her music produces. She expands upon the modest guitar parts with layered vocals, backup singing, duo guitars weaving in and out establish a more interesting set-up. The ending of "Forest on Fire," with its distorted electric guitar weeping from behind the signature simple acoustic guitar gives me goose bumps.

The most haunting and dark of all her songs is "Swastika". Like a summarization of Tiny Vipers music, this song demonstrates the potential of her voice, from deep sorrow to biting accusation. The guitar is fetching with a delayed build up in the middle. Most importantly what makes this song are the lyrics. With a voice like hers, it's encouraging to know she has the poetic ability to accompany it.

The entire CD has a theme of uncertainty, those embarrassing moments of being laughed at by others. Macabre is heavily a theme, with open questioning of Christianity. "When the dead rise/the dead rise up laughing/away…" pokes at the absurdity of modern religious beliefs.

Recently I crossed paths with Fortino at the commencement of the new Cha Cha Lounge. How awkward I felt to have this singer whom I had been admiring for a few months busing my empty beer glasses. [I also especially feel that way about These Arms Are Snakes' Steve at upstairs burrito bar Bimbos.] Apparently no longer are the days wiping up tables for Fortino, as she heads out for her first tour across the country. Maybe now is the time for her talent to be noticed on a national level.