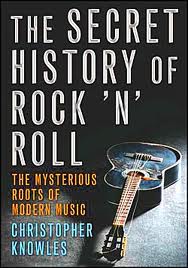 'Tis the season for celebrated mythology: The Secret History of Rock 'N' Roll

Christopher Knowles is the author of the recently published book The Secret History of Rock ‘N’ Roll, which ties the rock-era music scene back to mystery cults formed “since the Stone Age.” Christmastime is a festive season when we party hard, glory vicariously in exciting fables, and when some of us even shove our mystified beliefs in others’ faces in the broader culture. So chatting with the award-winning writer of this elucidating tome on tropes behind our rock idols seemed like a great way to chop up myth, music, and magic just at the right moment in 2010.

Knowles has been a writer and editor for some time, and his Our Gods Wear Spandex: The Secret History of Comic Book Heroes is also an excellent analysis of how ancient archetypes become cheap everyday thrills. But it was his tenaciously intense engagement with a certain UK punk-into-pop band in Clash City Showdown: The Music, Meaning, and Legacy of The Clash that got me into his work. I admire his passion and fierce intelligence at dissecting culture we enjoy and use to transcend our lives habitually. Below is our chat with Mr. Knowles about all these things.

Three Imaginary Girls: Chris, thanks for answering some questions about your book The Secret History of Rock ‘n’ Roll. I really appreciate it, as I had been thinking a lot about its topics lately — how certain philosophical strains inform the songs and navigate the creativity of so many bands (even when those bands aren’t completely aware that they adhere to any beliefs or type of behavior).

I’m sending you these questions during the Christmas season, a perfect time for such analysis — as an example of how mythology and specific belief in something gets smeared around the culture, including the pop one. Was it your rigorous study of the super-mythologized The Clash on your long-running fan website and in the book Clash City Showdown that began your thought processes on these topics?