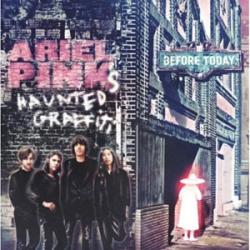 Before Today follows up Ariel Pink’s previous two Haunted Graffiti projects (and becomes its own “thing” via its addition to his name) Worn Copy (2005) and House Arrest (2006). It lives up to Ariel Marcus Rosenberg’s affection for Joe Meek’s home-recorded production odysseys, and in the infectious swoon of fifth track “Round and Round” and the 80s-style big-pop-style remake of the Rockin’ Ramrods 60s hit “Bright Lit Blue Skies,” it transcends record collector rock or the critic’s-easy-grab “freak folk.” This is a sultry psyche-pop peak experience limber enough to transcend fetishism for either almost-colossal AM buzz or fuzzy handmade culture of past aeons.

In his early 30s, Rosenberg’s infatuation for and collaboration with R. Stevie Moore (DIY songwriting cassette king, known for crafting mail art tapes that could be as thrilling as anything on alternative radio and as weird as the noise your druggiest pals made in their padded sound sheds) has blossomed into what is now and is aiming big time to be. Through infusing novelty porn soul (opener “Hot Body Rub”) with the dark city boogie he assimilated as a teenage Goth (check out “L’Estat” and “Fright Night” mashing butts together here for undercurrents), Ariel Pink’s Haunted Graffiti should keep earning him oodles of new acolytes.

It may have been Jimi Hey (The Rapture) and Animal Collective that discovered him, but he’s right at home on 4AD, the longtime/timeless label that consistently reinvents “art rock” for people who dread that tag. Like how their Pixies combined irresistible rock hooks with weird, Biblical rants about monkeys going to heaven and problems with hookers, or when Cocteau Twins invented their own vocal vocabulary to sit in the middle of beds of guitar and bass, Ariel Pink’s Haunted Graffiti is just as much about staking out its own territory with the past and the future as it is filling time with sound (and making you dance, oh yeah).

The new nickname for Rosenberg’s band makes a lot of sense, as fading montages and stark morning afters sit side by side in their own love-funk dimension, a artful abstraction of everyday life on walls of memory. 4AD sure knows someone has to make the new surreal Original Soundtracks for the next generation of party (ahem) animals, and investing in this cosmic commodity shows they know cash is poetry. Tonight’s show should be quite a bash.