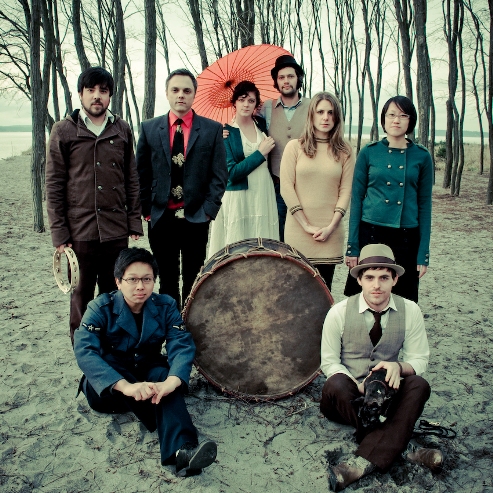 Normally, song titles like “Blessed Be Honey Bee” and “Napoleon’s Left Shoe” make me want to run for the hills. However, when it comes from a band like Grand Hallway, I just can’t get enough. Singer Tomo Nakayama’s voice is pure gorgeousness, warm and honey-toned. I also have a wee crush (shh, don’t tell her!) on vocalist/piano/accordion player Shenandoah Davis. Aside from her fantastic vocals, I am relatively positive she can play every instrument known to man, woman and child, for that matter – and probably some that aren’t.

This isn’t a put-on. These kids are phenomenally talented and genuine, which is why with such precious song titles, even a hard-ass like me can get into it. I would hazard that Grand Hallway’s sound could be included in the realm of orchestral or chamber pop, much like Belle & Sebastian-  but no matter what you call it, you should make a point of coming to see for yourself. Their next show is Wednesday, November 17th at the Triple Door, with the lovely Nick Jaina and Drew Victor opening up the night. Don’t miss it! Tickets are only ten dollars, and available in advance at the Triple Door’s website here.