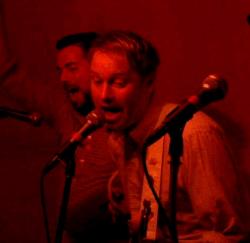 In Boston, it is rumored that the Catholic Church has decided to allow "getting indie kids to dance" as an admissible miracle toward the those required for canonization. If so, Tullycraft from Seattle are well on their way. The twee-poppers played Thursday night to a sweaty room full of bespectacled bookworms (with a few mohawks thrown in for good measure). The fun thing about Tullycraft is that they attract the shy kids and then force them out of their shells for a set of bouncy, ba-ba-ba, la-la-la, and sometimes even ba-da-ba-ba-filled anthems. It's hard not to smile when you hear the songs and even harder when you watch the band interact with one another on stage.

Sean Tollefson infectiously glowed with happiness the whole time, even when telling a story about his poor recall regarding people he has met. His tale led to the revelation that the next song on the setlist, a list selected by another band member, was familiar to him by name, but that he had virtually no idea how to play it. The Tullys shurgged and gave it a go anyway.

Drummer Jeff Fell, who plays like he's holding down the fort for a punk band, struggled with what I consider the worst drum set ever to participate in a live performance. The kit, borrowed from the opening act Pants Yell!, caused me to note during the earlier set that we were witnessing the most painfully bad sounding drums possible. Cardboard boxes, bags of flour, and tin cans would have had a more pleasant tone. As such, it was clear that AC/DC-shirt donning Jeff was a little frustrated, which resulted in a humorous comic contrast between him and the rest of the band, who didn't lose their grins for the whole set. Jeff's snarky comments and caustic jabs just ended up making the whole set funnier and more enjoyable and the rest of the band seemed unfazed. In the end, I think he was having a good time too. As this was my first show, I can't comment on whether this is the band's normal shtick or if he was just having a rough time dealing with the equipment. Either way, his playing was great and lended a tremendously important drive to the band.

The set included some of my favorite Tullycraft singles, "Superboy and Supergirl" and "Josie," but left out a few songs I would have expected to be show regulars, such as "Twee" and "Pop Songs Your New Boyfriend's Too Stupid to Know About." My long-standing theory that the band was secretly put together by parents against dark music was supported by the crowd-hypnotizing singalong "If You Take Away the Make-Up (Then The Vampires They Will Die)" and the humorous recent single "Georgette Plays a Goth." As such, Carter Tanton of the band Tulsa, doing sound for the night, carefully avoided playing any Xmal Deutschland, Lustmord, or Black Tape for a Blue Girl between sets.

I did learn one thing. Regardless of the deterring factors present at a Tullycraft show – bad-sounding drums, forgotten songs, overwhelming heat, and even incomprehensible Boston-based, anti-dancing inertia – the kids will dance, the kids will bounce, and a fun time will be had by all.