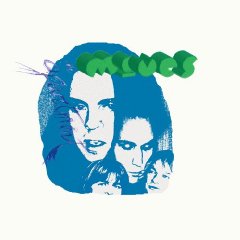 This is the third album from the Baskervilles, a band who sound lost in the dusky sweetness of New York at the end of the day, their songs peopled with souls who come out to play in the corners of dim clubs, heads swirling with drinks and chaotic relationships.

When people use the phrase "post-punk" these days they are usually talking about the current genre of stiff, alienated, cold dance rock songs. That is not what the Baskervilles are about at all. Rob Keith ("lots of vocals, guitar, trombone, clapping, yelping") and Stephanie Finucane ("vocals; guitar; keyboards; tssk") sing-play city-dwelling characters serving drinks and spilling joy into other people's lives, and their bandmates bassist Christoph Gerozissis and drummer Craig Van Orsdale help construct probably the warmest, sweetest, happiest power-pop songs around these scenarios you'll hear being played right now.

But this isn't amateur night: Baskervilles are as tight as the Kinks or Blondie, and just like those two bands, their urbane professionalism in composition and performance only makes their sound more boss. The lyric printed on the inside of the CD tray, "Memory is an ember / that leaves a shot / of radiated warm but / the details are abstracted / and best if left alone" perfectly describes the mystery of the band's songs and perhaps why, though the sound is so welcoming and wonderful, I get frustrated trying to get inside them. Unlike a lot of similar slice-of-life soundscapes by Ray Davies or Debbie Harry, there is not ironic darkness but a very physical hope in the tumescent glow of maddeningly-catchy anthems like opener "A Little More Time," the could-be-a-smash "Smash" and the perfect "Where Did My Summer Go?" My first few times through, I mistook this for a lack of depth.

The album as a whole takes on a blissful resonance that moves the heart from one place to another. The jauntiness or soulful stride of each individual track isn't the point, it's how each of the fourteen fragments tumble into the awesome closers "Moves" and "The Apartment." In the long run, while there are certain specific songs on their two earlier releases that exemplify the Baskervilles more completely, this is their art statement as album creators, proving that legendary producer Mitch Easter helped Keith design something that begs to be played over and over again. As I have been.