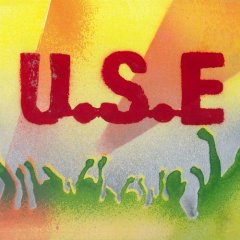 United State of Electronica wants you to have fun. Not just any kind of fun, but fun with a capital F. And you probably should capitalize the U and the N too, because this band will not rest until you are having FUN.

If you've seen U.S.E. live, you know what I’m talking about. It’s just about impossible to stand still at a show. The energy this band brings to every venue they play is definitely noteworthy. How does that manic spazziness translate onto CD? Amazingly well it turns out. The album is non-stop party-in-a-jewel-box from start to finish.

Appropriately, the self-titled album starts out with "It is On!" And indeed it is. This up-tempo number will have you shouting along in your cubicle. Actually, you’ll probably want to shout along with just about every song &151; be it "We love it!" (Emerald City), "Golden Gardens!" (Vamos a la Playa) or "It’s always the right time!" (Open Your Eyes), there are plenty of audience participation numbers here, and not by accident I’m sure. "Takin’ It All the Way" asks the listener to "come and join the party with USE," and that invitation is awfully hard to resist from a song so cute.

Standout tracks are the aforementioned "Open Your Eyes," a guitar-heavy rocker, and "Emerald City," a sparkling ode to our fair city. I also love "Climb the Walls (Umbrella of Love)" &151; it’s a bit more mellow, but it still has the energy U.S.E. is known for. And since even the most hardcore party people need a break, the band cools it down a bit with "Night Shift," a slow jam featuring rapping from drummer Jon E. Rock. Originally not one of my favorite tunes, it grew on me once I realized it is the PERFECT song for roller-skating with that cutie from junior-high. There are also a few short instrumental bits that lead from one song to the next so you never have that annoying abrupt silence between songs. And isn’t that what it’s about &151; keeping the party going?

Also keeping the party going is the top-notch musicianship on this album. In this age of technology, a toddler could make dance music; that doesn’t mean it’s any good (don’t believe me? Try listening to Radio Disney some time.). Luckily, the band knows what they’re doing. First and foremost, a dance band needs a kick-ass rhythm section or no one’s gonna be shakin’ their booty. Jon E. Rock and Derek Chan (bass) get down on it with tight drumming and impeccable bass styling. Guitarists Peter Sali and Jason Holstrom help elevate the music from unoriginal electronica to dynamic rocktronica, and vocalists Amanda Okonek and Carly Nicklaus add sassy harmonies that give the music a feminine edge. Noah Star Weaver rounds out the band with major keyboard power, not to mention a vocoder.