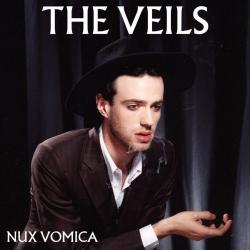 It might seem a little odd to start a review of the new Veils album with, well, a discussion of the Red Sox, but here we are. Anyway, I was listening to my Red Sox game webcast as I’m apt to do (being a Bostonian trapped on the Left Coast) and the discussion arose about why so many sons of baseball players end up being baseball players themselves. Various rationales were suggested from an early exposure to the game to having baseball “in their genes” to just wanting to impress dear ol’ dad. Well, the Veils might be seen as the Ken Griffey, Jr.’s of the modern rock scene, with Finn Andrews, son of XTC’s Barry Andrews, taking a cue from his pops to form a band rooted deeply in the hinterlands of rock, balancing between Brit-pop and rock. In the end, you got Nux Vomica, showing that the Veils are hitting the dreaded sophomore slump.

Of course, the Veils of their debut album, The Runaway Found, only share one band member, that being lead singer/songwriter Finn Andrews. He uprooted the rest of his band and replaced them with three new members and the Veils sound and matured with the roster moves. If you find yourself fond of the darker side of Brit-pop, then Nux Vomica might be your new best friend, because right from the start in “Not Yet,” it is hard not to be reminded of the likes Suede, from Finn’s downright Brett Anderson-like vocals. The song is evocative of dark and dusty bars late at night (and for some reason, to me, they should be in Australia, but that might be apparent later in the review), with Finn going off with fiery aplomb like a man beyond his years. However, Nux Vomica is not an album of dark and somber moods, no, instead it borrows from all aspects of the Anglorock that spawned Pulp, Manic Street Preachers and the Verve. “Calliope!” has a playful feel mixed with a rock and roll urgency, bending more towards the Auteurs while that heads us into the “Pan” the sound of the early Verve. The real apex of the album is a surprising pop song, “Advice for Young Mothers” that is downright hummable, capturing a piece of the Divine Comedy in the air, with the ridiculous 60’s female backing vocals for Finn leading into the chorus. Finn shows off his lyrical chops on the song too, bitterly singing ”I don’t want his pity and your scorn/boy, why you preaching, no one is listening anymore” and the highly Jarvis-like conclusion ”No man alive has earned the right to save me.”.

Finn sounds like he’s channeling early Modest Mouse on “Jesus for the Jugular” right down to the howled vocals (Finn has professed his fondness for howling at the coyotes in Death Valley), dead-march-like drums and thwacked guitars – think “Cowboy Dan” with a little more pop substance. They settle down into more of a Nick Cave-like “A Birthday Present” (coincident?), mixing pianos and darker harmonies and this is continued in the title track is is strongly influenced by songs like “The Mercy Seat” right down to the thrashed guitars that are thrown into the verses after it lulls you into a sense of safety. The drama that is constructed on the song is undeniable – and this is the strong suit of the band when can hit back at the listener, “terrifying and exciting” as Finn describes, and it’s a very apt description.

“Under the Folding Branches” and “House Where We All Live” are quieter songs, with is more like Boatman’s Call Cave, and while they do expand the sound of the band, they aren’t really what the Veils excel. However, they close out the album with the brilliant “Night Thoughts of a Tired Surgeon,” that channels the Smiths better than any band has ever, right down to the tortured Morrissey-like vocals and jangly Johnny Marr-like guitars – it is a beauty to behold as Finn wails ”I’ve been brought back to life so many times I don’t know what’s real”.

The cover art of Nux Vomica is clearly reminiscent of some of the old Nick Cave & the Bad Seeds album covers and that similarity is no coincidence, with the Veils taking a page from the Nick Cave playbook to moody but infectious modern rock. It might not be the perfect album, sometimes wearing their influences on their sleeve, but Nux Vomica turns out to be a very satisfying album. Whether or not Finn is trying to impress his modern rock dad, he should be sure that his dad is duly impressed with how far his son has gotten after only two treks into the rock wilderness.