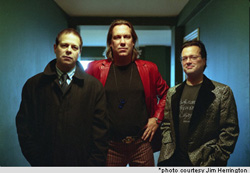 Imaginary Interview with the Violet Femmes

The Violent Femmes is among a great line-up of summer-mob-pleasing artists who will be playing at the Woodland Park Zoo in August—after them comes the Cowboy Junkies, Los Lobos, and Neko Case in the same month.

Of course, though the Zoo shows are known for having messaline crowds, the (sold out) Femmes' August 10th will probably have at least some fucking mooks who will roar walrus-like for "Blister in the Sun" and "Add It Up" I'd imagine, and suave-n-snaky lead singer Gordon Gano might lose his temper with them, and that will be fun.

Also fun is that the band is touring with original drummer Victor De Lorenzo and an extended line up of the Horns of Dilemma—two sax players, two trumpets, clarinets, etc. "We just get together with them and tell them, 'Blow hard, make noise, stand near the mic, don't worry about a thing.'" dominant bass player and band Apollo Brian Richie says. "Sometimes we have geniuses like Steve MacKay from the Stooges or Dick Parry from Pink Floyd, other times it's just a bunch of amateurs.

"Gordon enjoys having the original line-up back together," Richie continues. "It's like riding a bike, you don't forget how to play together. When Victor came back we just got back up on the stage and did it."

The Violent Femmes is a paradoxical name and band—a variation on what writer Frank Rose calls "rock's Avenging Dork" Ritchie and De Lorenzo founded the band in 1980 and added Gano the next year, after Richie and Gano had played a riotous set at Gano's National Honor Society induction (leading to his expulsion).

"When we made the first album we already had all the material for Hallowed Ground—it's misleading to think we went on a musical departure. We just chose to focus the songs differently for each album.

"We picked the simple ideas for the first album and we've been paying the price ever since."

In spite of uneasily-received adoration from frozen-in-time fans, the Femmes keeps going and Richie is a major reason. "Both Victor and Gordon have gotten to take lengthy vacations… I'm the one who's always on the job. I'm jealous!"

Those vacations have included Gano recording a strange gospel record with a band called the Mercy Seat in the 80s—which could be said to be the seed-release of all the Sufjan Stevens, Danielson Familie, and other evangelical variations coming out from labels like Secretly Canadian since the turn of the century. (The other two members are "not Crossetarians," as Richie puts it.) De Lorenzo has recorded four solo records.

The current tour has been more enjoyable for Gano because it's not a return to the busking days, as the material that was recorded for the recently reissued Shout! Factory Viva Wisconsin! album.

"That tour was a problem for him because he is afraid to play acoustic guitar in front of people," Richie says. "Luckily I bullied him into complying and the album is one of our biggest sellers. I love the sound of acoustic instruments." (Of course, the poop sheet the label sent out with the CD stresses that it contains "Blister in the Sun" and "Add It Up.")

The other recent reissue contains as a bonus cut a live Femmes-style cover of Bob Dylan's "Positively 4th Street," the snarling, anti-scenester anthem that seems perfect for the band.

Richie says, "When I choose songs for Gordon to sing, I do it on basis of theme. If they are paranoid, whiny, self-pitying, or creepy he can handle it. We bought the music just to make sure we got the words right."