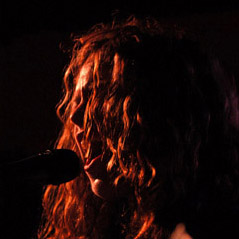 I'm sitting in the van on U Street with Rachel Flotard, lead singer and guitarist for Visqueen, taking their night off from tour with Neko Case to play a quick set for the D.C. fans. Visqueen, (Rachel, guitar/vox; Ben, drums; Ronnie, bass) just finished playing a powerful set upstairs at the Velvet Lounge, a set, so romping and raucous, that it prompted me to write in huge letters across my notes, "Rock at its fuckest." We're about to do an interview, and after donning a lumberjack hat and a sweatshirt passed down from her mother's garbageman, she asks what I want to talk about.

She let's out a sigh, brushes some of her wavy red and blonde and brown-streaked hair behind an ear. She takes a moment, thinks about it. Then she begins, speaking in a much softer tone.

She pauses and smiles, watches me scribbling furiously. It was a better answer than I ever thought I would get.

And thus ended the serious portion of the evening.

My evening with Visqueen really began when I was driving up to D.C. and called Rachel's cell phone. She answered amid static.

The call cut out.

I called her again later from Arlington. Since the call was so full or static and then cut out I wasn't sure if they wanted help loading in or if she wanted to sit down before or after the show.

Now it's about 7:15 and I'm outside the Velvet Lounge. It's cold out, cold enough for Pierre, a friendly homeless man I met for the first time outside the same venue a couple weeks before, to keep his 40 ouncers, still there, in a planter box outside. No worrying about them getting warm. My buddy and I want to go grab a bite to eat at the nearby Black Cat, where Visqueen is playing a couple weeks later with Shonen Knife, but I call Rachel first.

My buddy and I went and got some food. We ended up not wanting to walk all the way to 14th, so we just stopped at some bar we had never been to. And, since it was D.C., and there are some pretty trendy places around there, we ended up in a place where all the beers on tap were from Belgium or some other exotic hops-and-water places, and ended up dropping just as much money on two pints of Chimay as we did on the actual dinner.

We got back just in time to sit at the bar for awhile and meet Ronnie, the new bass player for Visqueen, replacing the forever wonderful and newly retired Kim Warnick. Having met Rachel and Ben when Visqueen toured with The Muffs, Ronnie's other music troupe, Ronnie was happy to join up in the van with Visqueen.

Then the show started. Having seen Visqueen only once previously, and that being at Sasquatch! last year at the Gorge, I was excited to see them in a much smaller space. The stage at the Velvet Lounge is eerily alike to the attic in "The Goonies," although probably not as large. They took the stage, and my buddy, who had never seen them but recently acquired their luxurious King Me record, was excited as well, especially when they turned out to be a much better live band, even better than the newer "Sunset on Dateland" record, which I love as I loved the first goldfish I ever owned.

I've said before that Visqueen's sound is that of the hypothetical arena rock one hears when they play air guitar with a tennis racket. But that was regarding their recorded sound. Their live sound is something else entirely. In the grand tradition of Seattle bands taking ideal rock and roll and spitting sweat and ripped t-shirts into it, Visqeen is successful best in their live element. I would have said that Rachel and Co. grabbed you with their first song, pulled you closer to them. And I would have said this with an implied metaphor in mind. But they did this quite literally.

It was, after all, the D.C. crowds which prompted the Dismemberment Plan to write a song called "Do the Standing Still," and so it was unsurprising when Rachel looked out to the timid crowd, backed away from the front of the stage and as spread out as possible from one another, that she stopped in between songs to coax them:

And we all moved forward as much as we could. It's hard to say no to a beautiful woman with a guitar. Later, she stopped again to revisit the idea of fun.

When she said "twenty minutes," Rachel wasn't kidding. The band made it through half of "King Me" and most of "Sunset on Dateland," Rachel's gritty guitar, Ronnie's throbbing bass pulse, Ben's crashing drums – all of them were right there in our heads and torsos. And the idea of fun – that if it's not fun for the audience, it's not fun for the band and vice versa – is key to Visqueen. Their shows are fun. Fun for the audience, and obviously fun for the band. And the fun that exists between the band and audience is something special. It's what makes a touring band like Visqueen something everyone should see.

Crammed into a small attic space with enough sound to fill a field, Visqueen played us rock at its fuckest. It was a great set, capped with an extra performance of "My House," dedicated to the friends that were letting the band stay with them that night.

After the show, we helped the band load up the van. Then Ronnie, Ben, and their friends went in for a few more beers and Rachel, my buddy, and I climbed into the van to try and stay warm and chat in a quieter area.

After she told me the story about Neko Case and "Kansas City," things turned towards much more important matters. Namely, the Tower of Hope.

The Tower of Hope was a radio station promotional statue, about eighteen inches tall. It was given to the band in the hopes that they could take it back to Seattle and give it to someone at 107.7 The End, for all their help in promoting the band whose three record covers and promo photo adorn the four sides of this tiny obelisk. And that band, is Creed.

The Creed Tower of Hope was ever so enjoyable, and rather than take shots at what, really, was a pretty awful band, complete with sponsorship by Paul Reed Smith's super-extra shiny guitars, Rachel pointed at the band photo and said:

While I wish I could go into detail as to everything we talked about, it would take much too long for a single article, and in the end all readers would just think that everyone in that van was a terrible person. You see, we talked about the state of reality t.v. (Rachel equates watching "The Surreal Life" to heroin), we made fun of a man with a waist-length ponytail as he walked by the van ("Is that that guy's hair? Holy shit! Holy shit and a half. Can't you just see right into that guy's brain? That's like Crystal Gale commitment.") and then we talked about why Tenacious D and Abba are so good, why Rick Nielsen from Cheap Trick is just like something out of "Fast Times" and why cops in D.C. are assholes.

And that was about it.